IOM Chad is actively working on creating space to implement transitional programs across various emergency situations in the country. The Country Office is sharpening its focus on the humanitarian-development-peace nexus. Specifically, IOM Chad works in support of displaced communities in remote and border regions to provide life-saving humanitarian assistance and to support the Government of Chad in identifying opportunities to address short-term displacement while progressively resolving protracted displacement situations. To this end, IOM is increasingly orienting its programming towards community stabilization, peacebuilding, and integrated holistic community development, particularly along the borders with Libya, the Central African Republic, and in the Lake Chad Basin area in order to address displacement drivers and ensure an integrated response. In parallel, IOM continues to develop its response to short-term displacement situations, notably due to natural hazard, through lifesaving assistance as well as mitigation and disaster risk reduction activities. IOM's initiatives aim to not only respond to lifesaving needs but also enable beneficiaries, communities and authorities to proactively and sustainably plan, design and participate in programmes to allow a seamless transition and limit dependence on humanitarian aid. 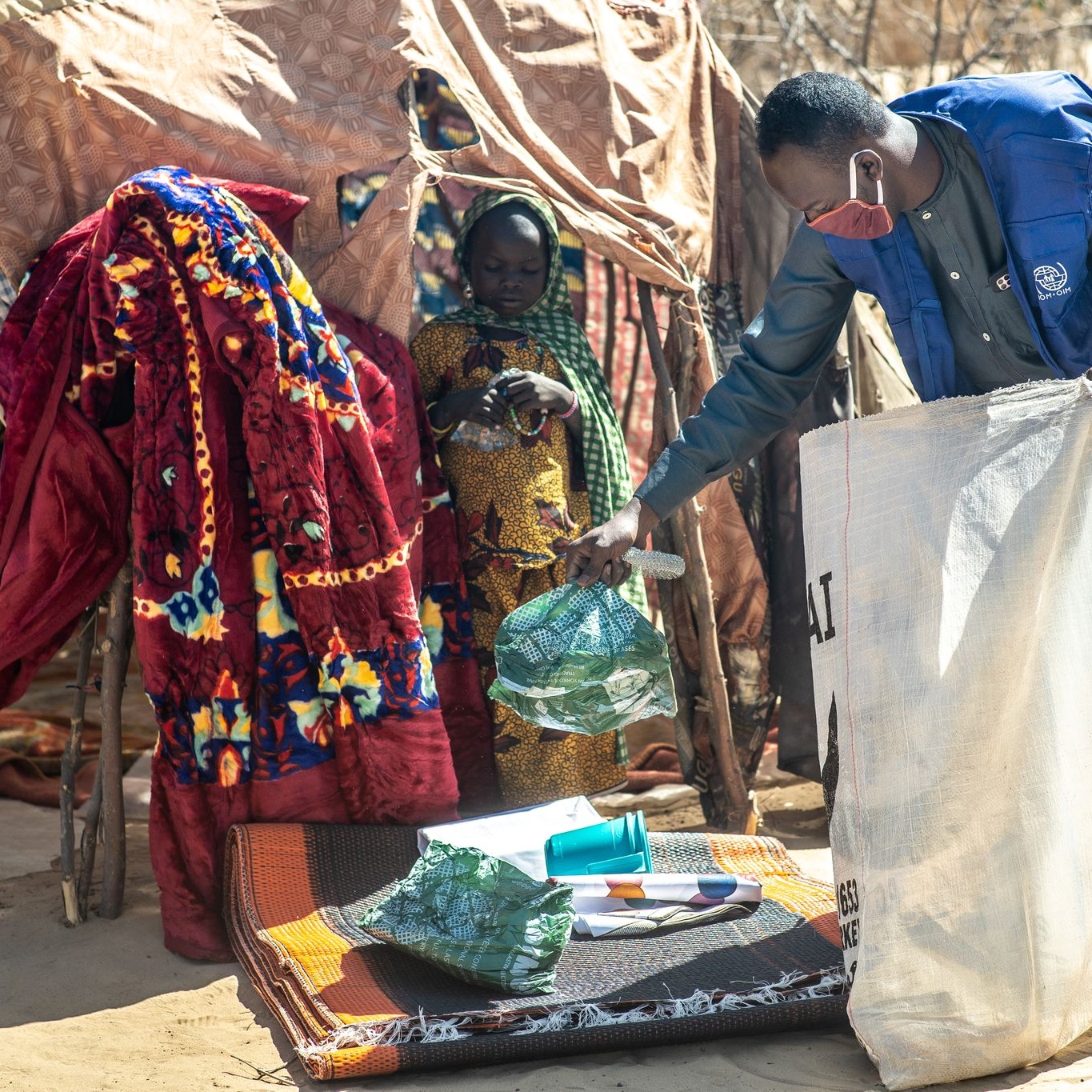 Distribution of NFI in a IDP site in Lake Chad province

Chad is a landlocked country surrounded by different conflict-affected areas, such as the Central African Republic (CAR), the Lac region between Chad/Cameroon/Nigeria/Niger, Libya, and Darfur, Sudan. Mobility to access markets and exchange with neighbouring countries, as well as transhumance movements, but also forced population movements of internally displaced persons (IDP), refugees or returnees have hence been ongoing in Chad for decades. As of November 2020, approximately 500,000 people are internally displaced in Chad, according to IOM Displacement Tracking Matrix (DTM) data: 340,000 IDPs and 170,000 returnees (either former IDPs or Chadians who returned from Nigeria, Niger, and CAR), resulting from insecurities linked to Non-State Armed Groups (NSAG), climate change and structural underdevelopment, but also forced returns from Libya.

Providing critical humanitarian assistance to IDPs remains one of the top objectives of the 2021 Humanitarian Response Plan (HRP) which highlights the necessity to cover the life-saving needs induced by displacement as a priority, alongside food security and health. IOM identified approximately 60,000 newly-displaced persons due to the recent attacks in the Lac province perpetrated by NSAG. In the northern provinces, the situation in Libya is affecting the borders with Chad. A continuously high level of populations crossing IOM Flow Monitoring Points in northern Chad, including smuggling and trafficking in persons, can be observed. Moreover, approximately 40,000 migrants are working in different gold mines in the border triangle between Chad, Libya, and Niger.

The 2020 rainy season particularly hit the Lac, the center, N'djamena, and the south. In the Lac province, more than 8,000 people have been displaced because of floods, and in N'djamena, several displacement sites have been set up to host around 20,000 people displaced by the rising level of the rivers. The flooding situation was addressed through significant coordination and preparedness efforts and was marked by national response capacity challenges to respond to disasters. The situation further exacerbated tensions around transhumance in southern Chad. Transhumance communities move cyclically through Chad and leave Chad mostly along its southern borders to the Central African Republic.

During the COVID-19 outbreak, more than 1,000 Chadian nationals have forcibly returned from several regions of Libya to Chad, entering through the Ounianga Kebir border post. Affected populations frequently report protection issues, physical threats, torture, and kidnapping, among others. Returnees and migrants entering Chad by land are particularly vulnerable as they face COVID-19 border management, mandatory quarantine and isolation measures, without available support, notably in the case of returns from Libya.

IOM is an active and engaged member of the Camp Coordination and Camp Management/Shelter/Non-food Items, Protection and Health clusters as well as the Humanitarian Country Team (HCT) and constantly reports and discusses interventions with other cluster partners. IOM has built strong relationships with national and local authorities and its initiatives align with local Government and targets' assessed needs. IOM’s DTM products are disseminated to other agencies and partners to inform crisis interventions in the area. Moreover, IOM is supporting the mainstreaming of counter-trafficking in emergencies among humanitarian partners’ activities. Since the beginning of the COVID-19 outbreak in Chad, IOM has been partnering with the Ministry of Health, the National Coordination for the COVID-19 Response and the World Health Organization in the coordination of the COVID-19 response.

IOM has been present in Chad since 2009. As of 2020, IOM has seven sub-offices in the territory: Baga Sola and Bol (Lac Province), Faya (North), Farchana (East), Moussoro (Center) Gore and Maro (South). These offices are supporting so-called antenna offices with purely operational capacity in Doba, Sarh and Koutere (South), Am Timan (East), Ati (Center), and Zouarké and Ounianga Kebir (North). Humanitarian agencies and other local and international actors are constantly in need of data on displaced populations, including on their humanitarian needs, to adapt responses to the continuous movements as well as to inform the crisis response. IOM’s DTM tools and products have been a central factor of analysis and assessment on programming and strategic orientation for IOM and partners' interventions. A recent survey launched among national and international partners in Chad shows that 92% of responders use DTM products to orient their humanitarian and development interventions and 97% of these are satisfied with the DTM products.

The Emergency and Transition Unit, the largest department within IOM Chad, counts approximately 160 staff members. IOM has a strong presence in the Lac province and the northern provinces, where IOM is moreover the only actor present from the UN system. In 2020, IOM directly reached 36,000 people with the provision of shelters, NFI, emergency transportation, COVID-19 equipment, and in some cases food assistance to stranded returnees in the northern borders. IOM Chad also works in partnership with community stabilization partners in the framework of three UN Peacebuilding Fund grants in the Lac, the south and the centre-north regions of the country.

Persons in protracted displacement situations in the Lac Province and South of Chad.

People at risk of being displaced or affected by disasters, notably for risks related to natural hazards, and local authorities.

IOM's emergency preparedness initiatives will include:

IOM will support local authorities and the Directorate for Civil Protection to reduce the risk of natural disasters through:

Humanitarian and nexus/development actors active in the wider response in the Lac Province.