With climate change impacting the route and calendars of nomadic herders throughout Western and Central Africa, imposing upon all stakeholders the need to ensure peaceful cohabitation between all groups and reduce the risk of violence and forced displacement due to competition over access natural sources, IOM aims to continue to support, at the local level, its Member States to develop early alert mechanisms and to reinforce local conflict mitigation strategies to pre-empt the risk of conflicts associated with herds movements, and, at the regional level, ECOWAS, its Member States, the Regional Herders Network and its national members, promoting multilateralism by ensuring that ECOWAS remains the forum where international transhumance is managed in a harmonized way. 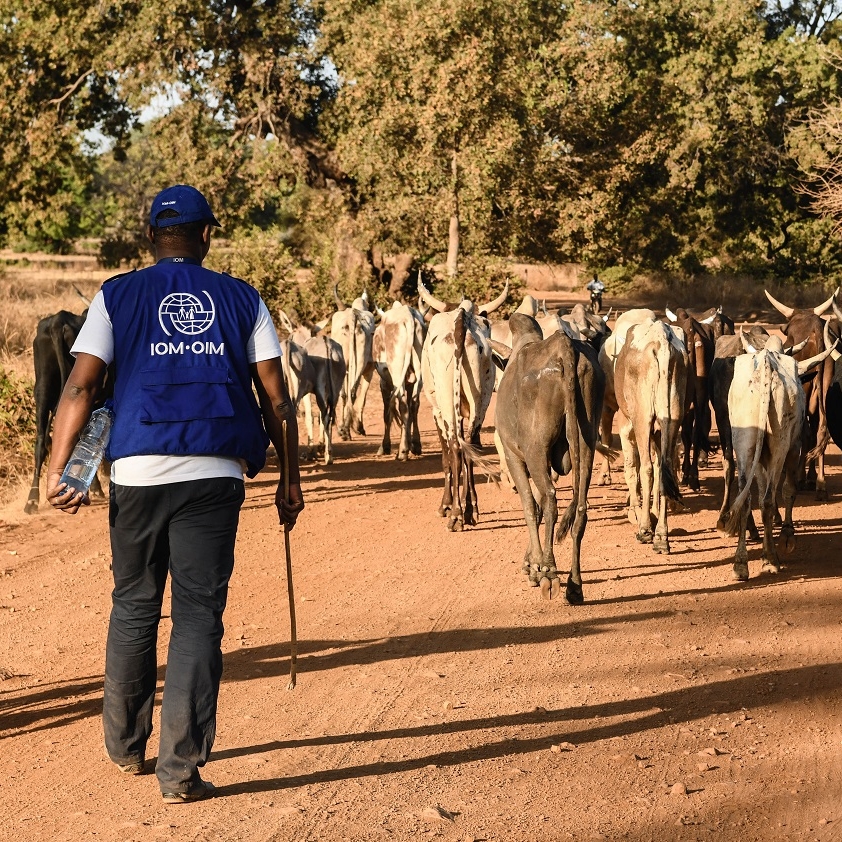 Insecurity and climate variability have forced shifts in the seasonal migratory routes of transhumant movements throughout West and Central Africa. The past years have seen an escalation of clashes between mobile transhumant and sedentary herder and farming communities over access to natural resources necessitating collective action to pre-empt and mitigate the risk of persistent loss of life and livelihoods across Ghana, Togo, Niger, Benin, Cote d’Ivoire, Burkina Faso and Mali; leading to a hardened stance by coastal countries who opt to close their borders. These policy decisions, however, have not halted the passage of transhumant herds through the coastal countries but made these movements more opaque, while unilateral decisions from affected countries jeopardize a coherent and integrated approach.

Recognizing these dynamics, multiple intra-regional bodies have convened focused policy-level discussions to formulate cohesive regional strategies to prevent further risk of tensions in their states, including the Economic Community of West African States (ECOWAS), accompanied by the largest regional herders' network, the Billital Maroobé Network (Réseau Billital Maroobé in French – RBM), who meet on a regular basis to take stock of the latest transhumance campaigns, grouped along the three primary transhumance corridors that cross from the North to the South in the West and Central Africa region.

Two core gaps have been highlighted as a result of these cyclical high-level consultations. ECOWAS Member States both emphasized the region’s lack of unified understanding of transhumant movements, their numbers and routes, and noted the direct impact this has on their ability to make sound policy decisions, as well as stressing the need for localised conflict mitigation approaches to successfully address these recurrent conflicts.

All countries targeted by transhumance programming are IOM Member States. In its support of these states and in partnership at the regional level with Billital Maroobé Network (RBM), IOM has been developing an early alert system at the micro local level; engaging local authorities, relevant line ministries and herder representatives to pre-empt potential conflicts linked to transhumance movements across several countries in West and Central Africa.

IOM also works closely with the Liptako Gourma Authority (ALG) to identify and discuss risks and vulnerabilities in the tri-state zone, and in turn has built working relationships with representatives of the Mali, Burkina Faso and Niger governments alongside national herders’ associations and local authorities representing local community perspectives, and the international community.

IOM participates in the Ministerial Sessions of the High-Level Regional Consultation for Peaceful Transboundary Transhumance organized by ECOWAS and RBM for the central corridor that bring around the table the relevant ministers of Benin, Burkina Faso, Cote d’Ivoire, Ghana, Mali, Niger and Togo. The Organization will continue to coordinate with these actors to ensure complementarity and information-sharing, in an effort to promote multilateralism given the regional scale of the herders’ movements and to reduce conflict associated with ungoverned transhumance.

With an established presence across all countries of the Central Transhumance Corridor, and also in Cameroon, Guinea and Côte d’Ivoire, IOM extends its support to its Member States on data collection and on localized conflict mitigation approaches through coordination with representatives of relevant line ministries and, where established, representatives of the National Transhumance Committees (CNT).

IOM’s global expertise in data collection through the Displacement Tracking Matrix (DTM) methodology, and its various tools, is of relevance to this strategy. Based on this methodology and in collaboration with the regional pastoralist network RBM in West and Central Africa, IOM has developed a set of dedicated tools to monitor movements at the scale of a region, map the status of routes and pastoral infrastructures, and an early alert system at the micro level to inform on a real-time basis the relevant local actors about the arrival of problematic herds in sensitive locations.

The TTT tools seek to enhance the capacity of the regional network to prevent conflict associated with premature transhumance through lands that have yet to be harvested. IOM is, therefore, able to benefit from this existing partnership with RBM, and from its demonstrated institutional experience in rapidly identifying and training enumerators on adapted methodologies to respond to the needs of various population movements.

To promote peace in the region in a context of transhumance, IOM will support the transitioning of groups out of conflict and provide support to community reconciliation processes as well as seek to mitigate the drivers of conflict. Interventions will include:

Animals and herders at a water point during a transhumance movement in Mauritania. @ Dreamartmedia, 2020