Skip to main content
A sensitization campaign implemented by IOM Haiti to raise awareness on COVID-19 vaccinations and the risks of irregular migration and human trafficking. @ IOM Haiti, 2021

IOM, together with key stakeholders, including governmental and non-governmental actors, is committed to addressing immediate and long-term mobility-related challenges in Haiti by enhancing the capacities of national institutions to better manage their borders and regional migration dynamics, addressing the root causes of irregular migration,  reducing forced movement and the vulnerability of affected and at-risk population, building resilience to identified risks and mainstreaming migration into the development agenda through policy and legislation. 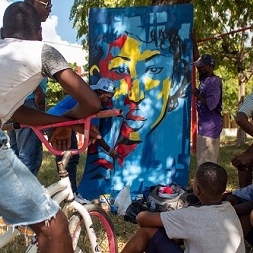 A sensitization campaign on COVID-19 vaccinations and the risks of irregular migration and human trafficking implemented by IOM Haiti. @ IOM Haiti, 2021

Due to its geographical position, the Haitian population is highly exposed to disasters including earthquakes, tropical storms and hurricanes which consequently generate heavy flooding, landslides, as well as the destruction of infrastructure and agricultural crops. The country is classified as the most vulnerable in the Latin America and Caribbean (LAC) region, and the 18th most vulnerable country in the world (INFORM Index 2021). Haiti’s climate-related events, combined with the recent socio-political unrest, and the deterioration of the security situation have resulted in overpopulation of urban areas and a significant increase in irregular migration of Haitians within the region. Since 2019, Haiti has witnessed a sustained increase in the frequency and number of repatriations from neighbouring countries such as the Bahamas, Turks and Caicos, Mexico, Cuba and the United States. Cumulative IOM reception data figures show that as of 12 December, there were a total of 12,993 repatriations in 2021 alone.

On 14 August 2021, a deadly earthquake rocked southwestern Haiti about 125 kilometres west of the capital Port-au-Prince. The earthquake severely affected public buildings and homes and damaged critical infrastructure and roads, cutting off access to some areas in the southwest, forcing almost 39,000 people to flee their homes in fear that they may collapse to seek refuge in evacuation shelters, host families and displacement sites (IOM, December 2021). The earthquake has dramatically exacerbated pre-existent humanitarian needs on the ground.

Overall, the humanitarian situation in Haiti continues to deteriorate, particularly in the wake of inter-gang violence in Port-au-Prince urban and peri-urban areas that has increased tensions, led to the internal displacement of over 19,000 people as shown by IOM’s Displacement Tracking Matrix and worsen cohesion among communities. In addition, the dramatic shortage of fuel has affected transportation and overall movements, paralyzing the country including humanitarian operations. Finally, Haitian communities living along the border with the Dominican Republic (DR) are struggling to provide for their families, due to the lack of basic services and infrastructure, which has led many to seek better opportunities and medical services on the other side of the border through irregular crossing points. Forced returns of migrants with irregular status from the DR is increasing, generating protection concerns, especially for the most vulnerable groups. To address this, humanitarian assistance needs to be complemented by efforts focused on preparedness, resilience and by a plan to transition into development-orientated interventions that will require a phased approach over the coming years.

IOM and the United Nations Integrated Bureau in Haiti (BINUH) have been closely collaborating to reinforce the capacities of the Government of Haiti (GoH) to manage and secure border areas, support the humane and orderly management of migration with particular attention to vulnerable migrants and victims of trafficking (VoTs), and the promotion and strengthening of the rule of law in Haiti, among other areas. In addition, IOM works in close coordination with national and local authorities for the earthquake response, and provision of humanitarian and protection assistance for IDPs affected by gang-violence and returnees as well as on disaster preparedness.

IOM leads the national Migration Working Group of the UN Migration Network. The Organization also co-leads the shelter/non-food items (NFI) working group together with the Housing and Public Construction Unit (UCLBP as per its French acronym), and the General Directorate for Civil Protection (DGPC), which are intervening at the onset of a disaster. Additionally, IOM co-leads the national counter-trafficking coordination group along with the national counter-trafficking committee (CNLTP) and the binational protection and the migrants and displaced people protection working group with the National Office for Migration (ONM, in French). Finally, IOM is co-leading the diaspora working group in coordination with IOM Washington DC and IOM Headquarters in Geneva as well as the camp coordination and camp management (CCCM) sector together with UCLBP.

Since its establishment in 1994, IOM has been working closely with the GoH on migration management and capacity building programs following years of turmoil that had caused internal and international displacement, forced migration and considerable economic decline. More recently, IOM extended its cooperation with the Government to address and mitigate the effects of disasters on the most vulnerable people as well as to promote resilience of the affected population and coping mechanisms.

IOM Haiti, through strategic oversight and direction of the IOM Regional Office for Central America, North America and the Caribbean, supports the GoH in identifying and addressing challenges related to migration. IOM Haiti’s activities are coordinated by the main office in Port-au-Prince with presence in Ouanaminthe, Cap Haitien, Gonaives, Belladère, Malpasse, Anse-à-Pitre, Miragoane, Jérémie and Les Cayes. Moreover, IOM maintains prepositioned NFI stocks in partnership with the DGPC in Cap-Haitien, Les Cayes, Miragoane, Port-au-Prince, Jeremie, Ouanaminthe, Anse-à-Pitres, Belladère and Gonaives; and supported the establishment of four Border Resource Centers (BRC), each located at an official border crossing point (Ouanaminthe, Belladère, Malpasse and Anse-à-Pitres), which function under the leadership of the state registration agents from the Institute of Social Welfare and Research (IBESR, in French) and the National Office of Migration. Within 48 hours after the earthquake, IOM was able to set up offices in each of the most affected departments, enabling continuous presence throughout the response. IOM's presence across the country allows for the implementation of country-wide interventions and its prepositioning capacity ensures rapid emergency response after sudden-onset disaster.

(1) Protracted IDPs and those at risk of protracted displacement; (2) IDPs affected by natural hazards; (3) vulnerable host communities in areas of displacement and communities of return where services are inadequate or overstretched; (4) IDP returnees, facing severe conditions or affected by the growing gang activity of urban areas of Haiti; and (5) international vulnerable migrants in need of humanitarian assistance and access to basic services (health, psychological support, etc).

As co-lead of the shelter and displacement cluster, together with the Unit for the Construction of Housing and Public Buildings (UCLBP) and the Haitian DGPC, IOM will continue to support the reconstruction and rehabilitation of areas affected by the 14 August earthquake. IOM activities will include:

As co-lead of the camp coordination and camp management (CCCM) working group along with the UCLBP, IOM aims at providing efficient and timely support to the GoH in the coordination and management of IDPs sites, both resulting from the ongoing gang-clashes in metropolitan areas of Port-au-Prince, and those affected by disasters such as the 14 August earthquake in southern Haiti. Specifically, IOM will:

IOM provides life-saving primary health services, referral and health facility support, complementing mental health and psychosocial support (MHPSS) in the most vulnerable areas such as the border, in informal displacement sites, and in areas of return, by:

IOM will provide mental health and psychosocial support (MHPSS) with a focus on services which ensure a strengthened protective environment amongst the most vulnerable groups. All MHPSS activities will be in line with IOM's Manual on Community-Based Mental Health and Psychosocial Support in Emergencies and Displacement and will respect COVID-19 preventive measures (use of mask, hydro-alcoholic gel available, personal protective equipment (PPE), as appropriate). Interventions will include:

IOM will provide relief and assistance to the most vulnerable migrants and displaced people, including individuals with chronic diseases and disabilities, the elderly, and pregnant women as part of IOM’s comprehensive protection assistance. Initiatives will include:

IOM will assist returnees, repatriated migrants with upon arrival assistance as well as IDPs, including persons with disabilities, currently in emergency shelters and in need of safe, voluntary and dignified movement assistance to leave the sites. Initiatives will include:

IOM  will provide emergency assistance to returnees repatriated to Haiti by air, land, and sea, as well as to the most vulnerable people affected by the earthquake and those affected by gang violence. Activities will include:

IOM Protection staff discuss with those displaced by insecurity, many now living with a disability at the Delmas 103 site in Port-au-Prince. @ IOM Haiti, 2021

(1) Protracted IDPs requiring better/increased support for a safe and sustainable voluntary return; (2) deportees and communities in areas of return in need of basic services, livelihoods, safety and security; and (3) government authorities, civil society organizations and NGOs requiring capacity building and greater stability for the resumption of services.

IOM's initiatives to support the most vulnerable and foster community stabilization will include:

IOM will contribute to the strengthening of Haitian health systems through:

IOM will contribute to peacebuilding efforts in the country by strengthening communities’ capacity to promote the peaceful resolution of conflicts and responding to threats that might lead to relapse into conflict or violence. Interventions will include:

(1) The Government of Haiti, including national and local authorities; (2) community leaders to better equip them to deal with disaster management to mitigate risks Haiti is facing, as well as (3) governmental and (4) non-governmental actors in their efforts to include and mainstream risk reduction and preparedness, and (5) communities living in disaster-prone areas.

Despite the efforts made to date by the sector, the most urgent shelter-NFI needs in a disaster situation remain partially unaddressed and the most vulnerable Haitian populations are still exposed to high risks. IOM’s initiatives to support the most vulnerable will include:

IOM’s disaster prevention activities will support the most vulnerable in order to prevent new risks and mitigate the impact of existing ones by:

Activities to strengthen MHPSS systems include:

IOM's DTM data will benefit (1) relevant governmental authorities; (2) United Nations agencies; and (3) partners in the field, by providing information on the most vulnerable members of target Haitian communities, including INGOs, local NGOs, CSOs and so on.

In a context of high political instability and increasing social and economic insecurity, IOM aims to support the Government of Haiti in monitoring the migration flow (by land, sea and air) to ensure information gathering in order to profile and assess the needs of vulnerable migrants. In order to do so, IOM will:

IOM will continue to effectively manage and maintain NFI stockpiles, through a strong supply chain mechanism to provide goods and supplies to the most vulnerable people affected by natural hazards. Activities will include: