IOM, together with key stakeholders, including governmental, non-governmental actors and affected populations, is committed to addressing immediate and long-term mobility-related challenges in Haiti by enhancing the capacities of national institutions to better manage their borders and regional migration dynamics, reducing forced movement and the vulnerability of affected and at-risk populations, building resilience to identified risks, and mainstreaming migration into the development agenda through policy and legislation. 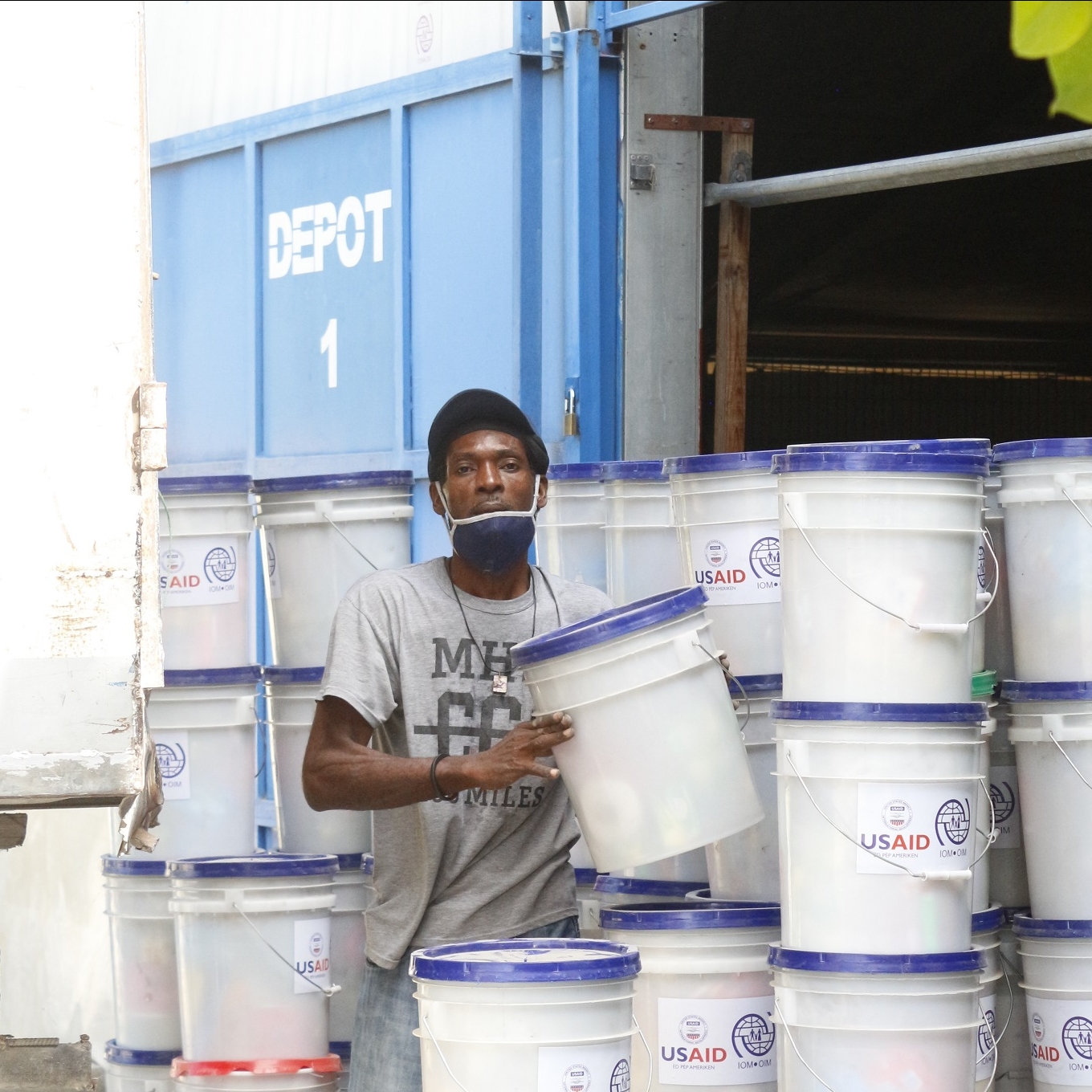 Loading of emergency kits from IOM's warehouse to respond to flooding in St-Marc. October 2020 ©IOM Haiti

Haiti is exposed to extreme weather conditions and frequent natural disasters due to its position over two major tectonic faults, as well as being situated within the "Hurricane Alley". A widespread lack of resources has resulted in insufficient capacity at the institutional level to protect and assist the population before, during and after disasters, and in addressing long-term climate change adaptation needs. The country also continues to experience increasing insecurity, overpopulation, widespread poverty, enormous economic inequalities, and high exposure to epidemics. This is exacerbated by a weak health system, scarcity of water, poor sanitation and hygiene infrastructures, chronic food insecurity and high environmental degradation. All of these factors combined render the country particularly vulnerable, with 4.6 million people in need of humanitarian assistance (HRP, 2020).

Migration dynamics of Haitians remain one of the most complex and challenging in the region. It is estimated that there are more than 1.6 million Haitian migrants across the world (MPI, 2020), mostly in the United States of America, Canada, the Dominican Republic, France and the Bahamas. A significant increase in movements and repatriations of Haitian migrants have been observed for the better part of 2019 and continued in 2020 due to the enforcement of neighbouring migration policies, albeit less frequently due to COVID-19 related movement restrictions. A total of 2,972 migrants have been repatriated to Haiti since 2018, including 1,052 just between June and November 2020. These include 0.5% pregnant and 1.1% breastfeeding women, 0.6% disabled people, 2% unaccompanied minors, 1.8% elderly and 0.7% chronically ill. Adding to these challenges, the country has been experiencing an increase in gang-related activity since September 2020. Growing violence is especially notable in urban and peri-urban areas of Port-au-Prince, leading to the displacement of people living in affected vulnerable neighbourhoods.

In addition, the earthquake that hit Haiti on 14 August 2021, destroyed and severely damaged thousands of buildings, home and critical infrastructures, as well as forced many to flee their homes in fear that they may collapse and seek refuge in evacuation shelters and host families.

Also, in September Haiti experienced a sudden increase in repatriation movements from the U.S. and other neighbouring countries such as Mexico, Bahamas, Cuba and Turk and Caicos Islands. Most returnees had been detained in poor conditions without access to a lawyer or legal aid. Many also suffered loss or confiscation of documents and personal belongings as well as discrimination.

These factors combined contribute to exacerbating the country's vulnerability, undermining the government's capacity to address the needs of the Haitian population and thus directly driving irregular migration flows.

IOM Haiti works in close collaboration with the UN agencies present in the country, such as UNDP, UNFPA, UNICEF and UN Women, as well as with main national and international NGOs operating in the region. IOM Haiti is a member of the United Nations Country Team (UNCT), the Humanitarian Country Team (HCT), and is a signatory agency of the UN Development Assistance Framework (UNDAF) 2017-2021 as well as the Integrated Strategic Framework (ISF) 2020-2021. IOM and the United Nations Integrated Bureau in Haiti (BINUH) have been closely collaborating to reinforce the capacities of the Government of Haiti (GoH) to manage and secure border areas, in supporting the humane and orderly/management of migration with particular attention to vulnerable migrants and victims of trafficking (VoTs), and the promotion and strengthening of the rule of law in Haiti, among other areas.

IOM is the lead of the National Migration Working Group of the UN Migration Network. IOM also co-leads the Shelter/Non-food items (NFI) Working Group along with the Housing and Public Construction Unit (UCLBP), and the General Directorate of the Civil Protection (DGPC) which are intervening at the onset of a disaster. Those entities also promote "Build Back Safer" principles, monitor and coordinate all repair and reconstruction activities for evacuation shelters and houses affected by disasters. IOM is also the co-lead of the National Counter-Trafficking coordination group along with the National Counter-Trafficking Committee (CNLTP) and co-lead of the binational protection working group with the National Office for Migration. IOM is additionally co-leading the Diaspora Working Group in coordination with IOM Washington DC and IOM Headquarters in Geneva as a pilot in Haiti.

IOM has been operational in Haiti since 1994, supporting the GoH in identifying challenges related to migration and in formulating appropriate responses. The mission's activities are coordinated by its main office in Port-au-Prince with four sub-offices in Ouanaminthe, Port-de-Paix, Anse-a-Pitre and Jeremie. IOM, through the Disaster Risk Reduction (DRR) Programme, is available to rapidly respond to emergencies at a national or regional level by maintaining an emergency NFI stockpile for 18,500 households, prepositioned throughout four warehouses in Port-au-Prince with four sub-offices in Port-au-Prince, Gonaives, Cap-Haitien and Les Cayes. IOM Haiti's operations are guided by institutional frameworks including the Migration Governance Framework (MiGof), the Migration Crisis Operational Framework (MCOF), the Progressive Resolution of Displaced Situations (PRDs), the Institutional Framework for Addressing GBV in Crisis (GBViC), Displacement Tracking Matrix (DTM), etc.

(1) Protracted IDPs and those at risk of protracted displacement; (2) vulnerable host communities in areas of displacement and communities of return where services are inadequate of overstretched; (3) IDP returnees, but are facing severe conditions or are affected by the growing gang activity of urban areas of Haiti; and (4) international vulnerable migrants in need of humanitarian assistance and access to basic services (health, psychological support, etc.).

IOM provides life-saving primary health services, referral and health facility support, in addition to mental health and psychosocial support in the most vulnerable areas such as the border, in informal displacement sites, and in areas of return, by:

IOM will provide mental health and psychosocial support (MHPSS) with a focus on services which ensure a strengthened protective environment amongst the most vulnerable communities. All MHPSS activities will be in line with IOM's Manual on Community-Based Mental Health and Psychosocial Support in Emergencies and Displacement and will respect COVID-19 preventive measures (use of mask, hydroalcoholic gel available, PPE, as appropriate). Interventions will include:

IOM will assist IDPs currently in emergency shelters and in need of safe, voluntary and dignified movement assistance to leave the sites. All IOM interventions will respect COVID-19 preventive measures (use of mask, hydroalcoholic gel available, PPE, as appropriate). Initiatives will include:

IOM will provide relief and assistance to the most vulnerable migrants and displaced people, including individuals with chronic diseases and disabilities, the elderly, and pregnant women as part of IOM’s comprehensive protection assistance. All IOM interventions will respect COVID-19 preventive measures (use of mask, hydroalcoholic gel available, PPE, as appropriate). Initiatives will include:

Given the current political and security instability in Haiti, it is imperative that technical and operational support continues to be provided to the National Office of Migration (ONM) – IOM’s primary interlocutor at the Government of Haiti, which is currently operating with very limited resources.

IOM has been co-leading the Haiti Shelter/NFI Working Group supporting the Haitian government (DGPC and the Unit for the Construction of Housing and Public Buildings (UCLBP) by providing technical and strategic guidance to national and international shelter partners, as well as coordination support. Activities include:

IOM’s cash programme supports individuals affected by gang violence and earthquake through cash-based interventions to improve the basic needs integrated into various areas of IOM programming, such as CCCM, S-NFI, and protection.  IOM is also providing emergency assistance to returnees repatriated to Haiti from air and sea.

(1) Protracted IDPs requiring a better assessment of their situation and support for a safe and sustainable voluntary return; (2) deportees and communities in areas of return in need of basic services, livelihoods, safety and security; and (3) government authorities, civil society organizations and NGOs requiring capacity building and greater stability for the resumption of services.

IOM will contribute to the strengthening of Haitian health systems through:

IOM will contribute to peacebuilding efforts in the country by strengthening communities’ capacity to promote the peaceful resolution of conflicts and responding to threats that might lead to relapse into conflict or violence. IOM will ensure all interventions respect COVID-19 preventive measures (use of mask, hydroalcoholic gel available, PPE, as appropriate). Interventions will include:

IOM's initiatives to support the most vulnerable and foster community stabilization will include:

IOM will support (1) the Government of Haiti, including national and local authorities; and (2) community leaders to better equip them to deal with disaster management to reduce risks facing Haiti. In addition, IOM will also support (3) the government and (4) non-governmental actors in their efforts to include and mainstream preparedness and risk reduction.

Despite the efforts made to date by the sector, the most urgent shelter-NFI needs remain partially unaddressed and the most vulnerable Haitian populations are still exposed to high risks. All IOM interventions will take into account specific vulnerabilities of targeted groups (i.e. women, pregnant women, people with disabilities, elderly, etc) and will respect COVID-19 preventive measures (including use of mask, hydroalcoholic gel available and PPEs, as appropriate). IOM’s initiatives to support the most vulnerable will include:

IOM’s initiatives to support the most vulnerable to avoid existing and new disaster risks include:

To support the broader response, IOM will:

In a context of high political instability and increasing social and economic insecurity, IOM aims to support the Government of Haiti in monitoring the migration flow (land, sea and air) to ensure information gathering in order to profile and assess the needs of vulnerable migrants. In order to do so, IOM will: