In the Caribbean, IOM in collaboration with key stakeholders and a network of partners is committed to humanely and orderly support to communities at risk of displacement before, during and after a disaster and enhancing their resilience against multiple risks by enhancing the capacities of national institutions and organisations and mainstreaming displacement through policy and legislation. 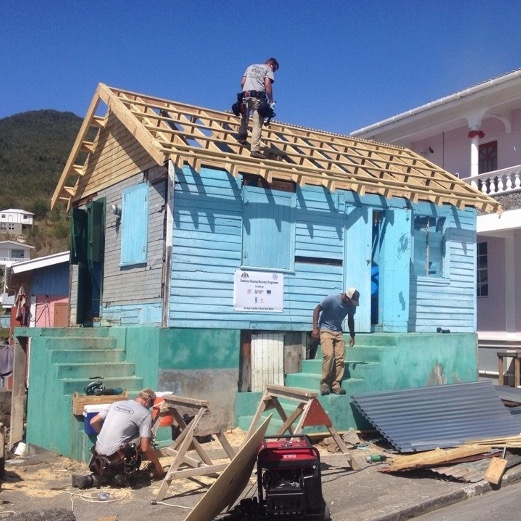 This Caribbean Environmental Resilience and Disaster Displacement Response Plan 2023 - 2025 defines the Caribbean as all islands in the Caribbean basin plus Guyana, Suriname, and Belize, located on the continent, but still members of the Caribbean Community (CARICOM). The plan targets all IOM member states, the American, French, British and Dutch overseas territories except Haiti, for which a separate Crisis Response Plan has been developed. The total population of the Caribbean is 45 million people of which 11,5 million live in Haiti. All independent countries covered are small island developing states (SIDS) and are very diverse in culture, state of development, size, and demographics.

As highlighted in the 2020 LAC INFORM Risk Index the Caribbean is one of the regions of the world most prone to a wide range of natural hazards, including hurricanes, floods, landslides, earthquakes, and volcanic eruptions. Rising sea levels and more frequent and intense extreme rainfall events will threaten communities in low-lying coastal areas and a significant number of major urban centres across the region. At the same time, there will be an increase in the frequency of heatwaves and drought, which, paired with reduced net levels of precipitation, will raise the risks of fires in the rainforests of Guyana, Suriname, and Belize. Water scarcity will become a significant challenge in multiple countries too and water quality is likely to deteriorate. Health emergencies, including cholera, zika, and dengue, are also a common and recurrent phenomenon. Many if not all these risks will intensify the population movements for which the social protection systems and emergency preparedness and response systems in the Caribbean are not prepared. Gender is a critical dimension of the vulnerability and resilience of the most exposed populations and influences how affected people experience environmental migration and disaster displacement throughout the mobility continuum.

Responding to disasters and increasing numbers of displaced persons will require an increase of response capacities, moving onto longer-term engagement on resilience and disaster risk reduction (DRR) while continuously ensuring the capacity for the swift delivery of assistance when needed. In line with the humanitarian-development-peace nexus, immediate needs must be addressed when they occur while building response capacities and facilitating long term resilience and DRR.

IOM Caribbean is gradually expanding its prevention, preparedness and response presence in the Caribbean through the establishment of a dedicated Caribbean Coordination Office in Barbados after the country became member of IOM in November 2022 and the autonomous growth of its ten Caribbean country offices.

IOM continues to build an Environmental Resilience and Disaster Displacement Support network of standby partners (government partners, NGOs and private sector) with presence in all countries, regions and islands in the Caribbean and the establishment of an IOM Caribbean Environmental Resilience and Disaster Displacement Support Unit that will lead the development of the disaster displacement preparedness, response and resilience-building capacity of the IOM offices in the Caribbean and its network of partners.

IOM continues to build the Caribbean capacity in protection, CCCM, cash-based interventions, WASH, and non-food item (NFI) distributions through intensive trainings and an increased volume of pre-positioned NFIs in Barbados and Panama. IOM also plans to add additional storage locations to serve especially the Northern and Southern Caribbean in collaboration with partners and UN agencies.

The IOM Caribbean missions receive technical support from the Caribbean Environmental Resilience and Disaster Displacement Support Unit, the regional office in Costa Rica and its Department of Operations and Emergencies (DOE) and Department of Peace and Development Coordination (DPDC) in Geneva. IOM manages an active roster of Emergency Response Specialists in the areas of CCCM, protection/gender-based violence (GBV), Displacement Tracking Matrix (DTM), cash-based interventions (CBI), WASH, shelter & NFI and the inclusion of migrants in disaster risk management through its Migrants in Countries in Crisis (MICIC) programmes.

Over the last decade, IOM in the Americas has responded to numerous emergencies in the region including the 2021 earthquake in Haiti, La Soufriere volcanic eruption in St Vincent & The Grenadines, tropical storm Erika (2015), Hurricanes Matthew (2016), Irma and Maria (2017), Dorian (2019) and Ian (2022), as well as the COVID-19 pandemic and the Venezuela Crisis.

IOM Caribbean aims to support all its 16 Caribbean Member States and overseas territories of an additional four member states through a network of ten IOM country offices, a growing network of partner organizations and strong coordination with all nine UN Resident Coordinators offices. IOM is leading the development of the emergency shelter and NFI components of the contingency plans developed by the United Nations Emergency Technical Teams (UNETT).

In September 2022 IOM has formalized a partnership with the Caribbean Disaster Emergency Management Agency (CDEMA) around all aspects of human mobility before, during and after crises including evacuations, emergency shelter and data analysis.

IOM also signed an MOU with the Caribbean Community (CARICOM) Implementation Agency for Crime and Security (IMPACS) in 2021 on Migration Governance and Migration Management.

As global Camp Coordination and Camp Management (CCCM) co-lead agency, IOM will take a strong coordination and information management role in the Regional Group on Risks, Emergencies and Disasters for Latin America and the Caribbean (REDLAC) CCCM sector with a special focus on the Caribbean.

IOM will support governments in the coordination and management of their emergency shelters (collective centers) for displaced populations in one emergency in the Caribbean through: