IOM’s vision, in line with the Humanitarian-Development-Peace Nexus, is to work through a whole-of-society and a whole-of-government approach to contribute to a safe, prosperous, and resilient Bosnia and Herzegovina (BiH) by addressing the humanitarian needs of transiting migrants while supporting longer-term solutions, peace and social cohesion. IOM will continue to support the government of BiH to effectively manage functioning migrant reception, protection, and other assistance to meet the challenges of an increasing number of migrants transiting the country and contribute to ensuring their dignity, safety, and security. Furthermore, IOM will work with communities and the government to build social cohesion, preparedness for disasters, and resilience to drivers of instability in order to address negative drivers of emigration and prevent displacement. 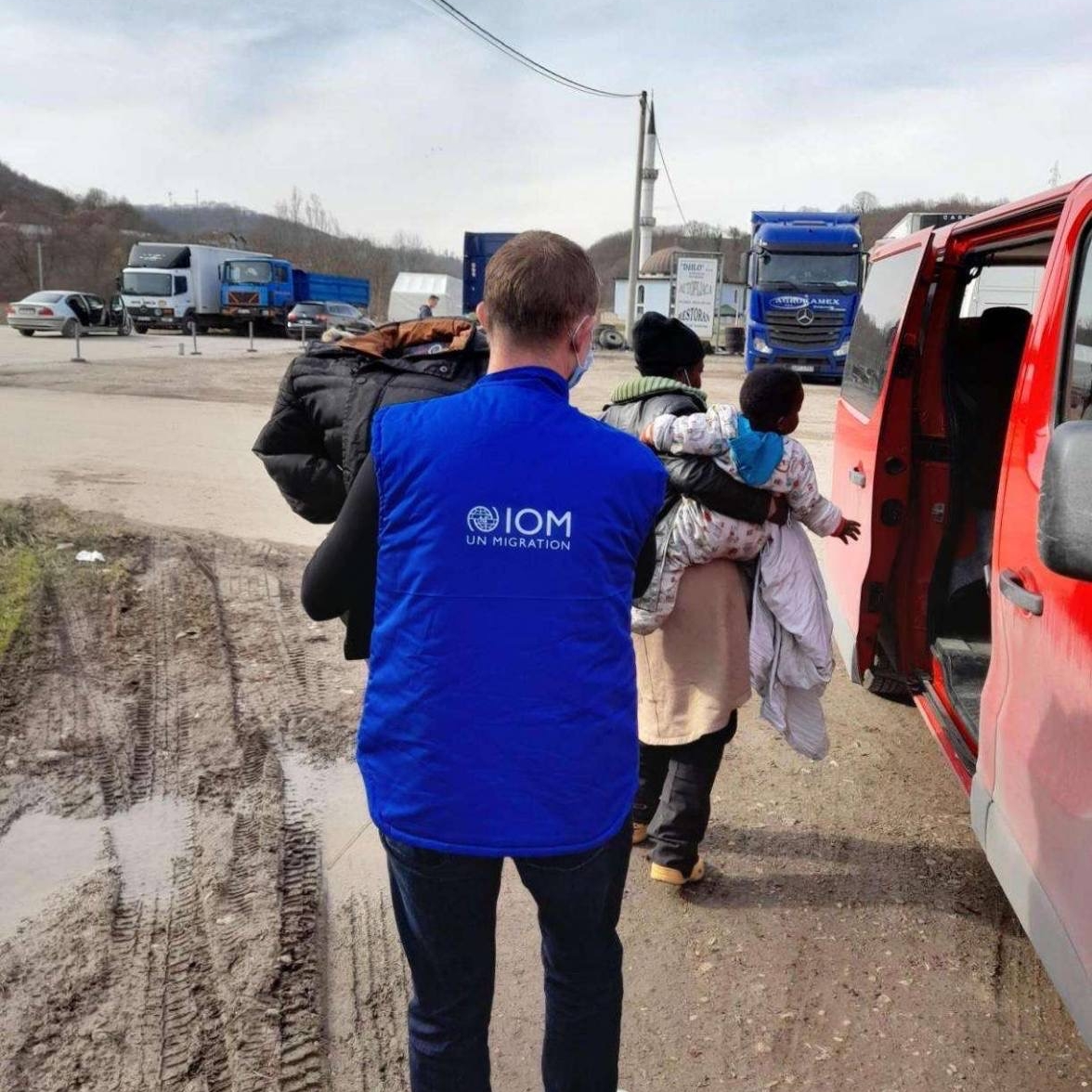 IOM staff provides support to migrants located outside of the reception facilities, including transportation to available shelter and services.

Comprising a diverse group of people including asylum seekers, refugees and migrants in search of a better life, the mixed migratory flows in the Western Balkans constitute approximately 30 per cent of all irregular entries into the European Union (EU) in 2022 so far. Arrivals by the end of November 2022 were above 23,000, already surpassing the number of total yearly arrivals for all of 2021. Migrants in Bosnia and Herzegovina (BiH) are primarily coming from Afghanistan, Pakistan, Bangladesh and Burundi, and are particularly vulnerable to human trafficking, exploitation and abuse, with at least 1 in 10 migrants being children. Many migrants transiting through BiH elect to stay outside of reception centres, exposing them to increased protection risks.

The presence of migrants is only one of several sources of tension in BiH communities, with precarious relations existing between migrant populations and host communities. More than 25 years after the end of the war, BiH continues to face unresolved war legacies. Divisive narratives and hate speech are on the rise in the country alongside the rise of small extremist groups including those espousing violence as a means of furthering their aims. Persistent tensions and unaddressed challenges between groups remain. Political tensions have increased since 2021, with one of BiH’s federal entities threatening withdrawal from State institutions, raising concerns over peace and stability in the country.

Additionally, BiH is at high risk of disasters. The nexus between migration, environment and climate change is multidimensional, and includes disaster risks such as flooding, wildfires, droughts, and long-term effects such as multi-year dry and hot summers leading to crop failures and health issues, chronic illness due to pollution, etc. In terms of displacement potential, the country is especially at risk of flooding, with an estimated 260,000 people at risk, wildfires, and crop failure, which increase the risk of displacement.

IOM closely coordinates assistance to the migrant population with the BiH Ministry of Security and its affiliated Service for Foreigners' Affairs, specifically in the establishment and running of the temporary reception centres which provide protection-sensitive assistance. In addition to being the main provider of assistance to migrants transiting through the country, as the lead agency for Camp Coordination and Camp Management (CCCM) sector, IOM also co-leads the Protection cluster and Protection Sector Working Group.

IOM chairs the UN Results Group on Resilience and Social Cohesion, in the framework of the United Nations Development Cooperation Framework (UNSDCF). In 2022, the UN Peacebuilding Support Office (PBSO) is undertaking a Peace Building Fund (PBF) eligibility process for BiH, which IOM coordinates at the country level. This process should result in an appeal directed at the United Nations to recognize the need for inter-agency peacebuilding initiatives.

The UN, with support of IOM as the CCCM co-lead, will start broad-based consultations between UN agencies, partners, civil society, practitioners, and the government, on a new course on Disaster Risk Reduction, which is becoming more and more urgent considering the latest climate change models predicting both more and stronger floods and forest fires, which may lead to inter-agency appeals or coordination forums.

IOM has been present in BiH since 1992, providing life-saving assistance and medical evacuations for war-affected populations. With over 250 staff members, IOM currently has four offices in BiH, including a main office in Sarajevo and three sub-offices in Banja Luka, Bihać and Tuzla, and a permanent 24/7 operational presence in the four active Temporary Reception Centers (TRCs) in BiH. Alongside the government and partners, IOM currently provides support to 17,000 migrants transiting BiH each year, running the day-to-day operations of the TRCs (including shelter, protection, food and non-food items and WASH).

IOM supports the government in the transition to a state-owned migration response through capacity building and technical support, a role mandated to IOM as the lead of the Camp Coordination and Camp Management (CCCM). IOM also works with local communities, authorities, minorities, and informal groups in a broad range of thematic areas, ranging from mobility, development, peacebuilding, community resilience, and human rights, which has contributed to building excellent relations over time.

IOM will continue working with the UN, civil society, and state partners to provide support and assistance to migrants, asylum seekers and refugees in host communities and those residing in temporary reception centres (TRCs). IOM will additionally be supporting and reinforcing the migration-related response capacities of key state, cantonal and local level institutions engaged in the migration response, namely the BiH Ministry of Security (including the Service for Foreigners’ Affairs), Ministries of Health, and local governments hosting migrants to address health and social vulnerabilities of migrants.

IOM will support local communities with low or deteriorating social cohesion and increasing susceptibility to violent extremism, institutions dedicated to strengthening communities – including educational and social institutions, and civil society organizations (CSOs), in a comprehensive approach to improve community resilience to violent extremism and radicalization. IOM will directly support and work with youth, families, marginalized community members, religious, cultural, and education leaders, and individuals facing socioeconomic stressors through peacebuilding initiatives. IOM will build upon its existing social cohesion infrastructure to defuse tensions and combat xenophobia, notably through programming to strengthen the health and social services for the benefit of both migrants and host communities.

IOM's Displacement Tracking Matrix (DTM) teams will collect data in reception centres and other locations where migrants gather or live, to provide relevant authorities and other key humanitarian stakeholders with timely information on migration flows, trends, needs and intentions to ensure an effective, coherent, and evidenced migration response. The data from these surveys inform protection and MHPSS assistance, shelter, food, and CCCM assistance, as it provides a statistical overview of the changing vulnerabilities, demographics and other variables quickly and reliably.

The Displacement Tracking Matrix (DTM) aims to improve the access of national institutions, civil society, and humanitarian responders to accurate, up-to-date data and knowledge on migrants arriving to, and present, in BiH. IOM will collect information on the migrants’ demographics, including countries of origin as well as transit areas, detailed information on specific vulnerabilities, socioeconomic circumstances, routes and further movement intentions, among other topics. Following data analysis, reports will be disseminated to stakeholders and used as guidance for knowledge-based policy, and technical and capacity-building support. Part of the data will also be made publicly available on the DTM website, when in line with IOM data policies. Specifically, IOM will: