Skip to main content
Community consultations on the identification of priority activities in Farabougou, Mali. @ IOM, 2021

As part of its efforts to engage in the responses in the Central Sahel region, the International Organization for Migration (IOM) has been scaling up its operations in Burkina Faso, Mali and Niger to provide life-saving support to displaced and vulnerable persons affected by the growing crises, while seeking to reduce conflict drivers across the region, and prevent the expansion of the conflict into bordering regions and countries. IOM is responding to both the humanitarian and governance priorities in providing assistance and protection to affected and displaced communities, while also addressing the structural causes of instability in affected areas, maintaining a specific regional focus on cross-border fragility/dynamics. 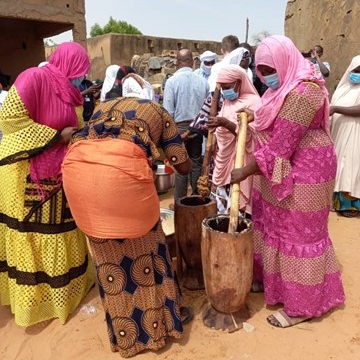 Women groups are provided with training and equipment for peanut processing in Tillabéri, Niger. @ IOM Niger, 2021

In the Central Sahel area, which covers Mali, Burkina Faso and Niger, long-standing lack of development and a recent increase in violence over access to natural resources has created an environment exploited by non-state armed groups (NSAG) and exacerbated inter-communal conflict. The Liptako-Gourma tri-border area between Burkina Faso, Niger and Mali, is severely impacted with the high risk of conflict spill over to neighbouring states, including Mauritania, and the coastal States of Cote d'Ivoire, Ghana, Togo and Benin. The complex crisis is exacerbated by climatic variability, demographic pressure, high levels of poverty and the absence of state institutions in most of the regions impacted, which further creates disaffection and a lack of access to basic services as well as to livelihood opportunities. NSAG activity has expanded geographically in recent years, increasing exponentially between 2018 and 2021, restricting access by state, humanitarian and development actors to the populations most in need of support. The crisis also generates significant protection concerns due to the frequency of human rights violations committed by all forces and armed groups, widespread violence, notably towards women and children, the presence of explosive devices, forced recruitments into NSAG and kidnappings, a lack of access to documentation or justice and massive forced displacements. These concerns have been frequently highlighted by the Project 21 protection monitoring dashboards and reports produced by the Regional Protection working group. In late 2021, according to IOM’s Displacement Tracking Matrix (DTM), national authorities, UNHCR and OCHA, over 2.3 million people have been internally displaced by the ongoing crisis, across all three States and humanitarian needs are tremendous for all displaced and affected communities, notably for food, water, shelters and health services, including mental health and psychosocial support, which has been further exacerbated by the COVId-19 pandemic. In addition, Mali has also experienced two coups (August 2020 and May 2021), which creates a very fragile political situation as the Economic Community of West African States (ECOWAS) is sanctioning the country for not organizing new elections in the initial timeframe. The beginning of 2022 was also marked by a military coup in Burkina on 23-24 January, which is opening an uncertain era in the country. On 27 January 2022, in follow up to a Ministerial Round Table held in October 2020, a virtual Senior Official Meeting on Central Sahel was convened by the United Nations, the European Union, the German Federal Foreign Office and the Ministry for Foreign Affairs of Denmark to alert on the dramatically deteriorating situation in the region and appeal for 2 billion dollars to assist over 15 million people in dire need of humanitarian assistance.

IOM works across the humanitarian-development-peace nexus. In this respect, IOM has developed tools to enable flexible delivery of assistance covering immediate humanitarian needs, while addressing structural gaps leading to sustainable and local development, alongside a range of United Nations (UN), Non-Governmental Organizations (NGO) and community-based local organizations, in support of all three Governments. IOM has been engaged in bolstering local coordination systems and supporting authorities at different levels through targeted programs. Being an active member of the United Nations and Humanitarian Country Teams in Mali, Burkina Faso and Niger, IOM leads the Shelter/Non-Food Items (NFI) cluster in Niger, the Mental Health and Psychosocial Support (MHPSS) working group in Burkina Faso, co-leads the Shelter/NFI cluster and Population movement commission in Mali and engages extensively with other agencies in numerous clusters and working groups to ensure the coordinated delivery of assistance on multiple fronts. IOM has forged partnerships with local authorities and civil society organizations that enable the localization and rapid operationalization of interventions. Across the three countries, IOM has capitalized on its local presence and established relationships to promote peace preservation and peace restoration, through social cohesion and local governance initiatives, seeking to both reduce current conflict drivers and lay the groundwork for effective interventions leading to durable solutions. These efforts are further supported at the regional level through constant dialogues with counterparts such as the Liptako Gourma Authority, Economic Community of West African States (ECOWAS), Community of Sahel-Saharan States (CEN-SAD), G5 Sahel and Lake Chad Basin Commission.

For the past years, IOM has been mobilized to respond to the short-term as well as medium-term needs in all three countries, where IOM has a long-standing presence. IOM’s intervention covers the whole spectrum of the Humanitarian-Development-Peace Nexus with emergency programming in key areas, transition and recovery efforts and social cohesion related activities. Currently, IOM's operational presence in Central Sahel States boasts over 700 national and international staff members, working in nearly 20 locations, across all three countries.

IOM’s assistance will target all those affected by the crisis and disasters related to natural hazards, including those forcibly displaced and their host communities as well as returnees. Groups with specific needs will receive particular attention and assistance tailored to their needs.

A woman standing in front of her newly constructed shelter in Diffa, Niger. @ IOM, 2021

IOM will support national and local authorities to reinforce preparedness and disaster risk reduction and will assist those communities most-at-risk of disasters and disease outbreaks, including at points of entry.

IOM’s support services such as the Displacement Tracking Matrix will benefit multiple Governments’ entities and humanitarian agencies that will be able to plan their humanitarian response and recovery interventions based on information on population movements and their related needs.