As part of its efforts to support the Governments’ responses in the Central Sahel region, the International Organization for Migration (IOM) has been scaling up its operations in Burkina Faso, Mali and Niger to provide life-saving support to displaced and vulnerable persons affected by the growing crisis, while seeking to reduce conflict drivers across the region, and prevent expansion of the conflict into bordering regions and countries. IOM is responding to both the humanitarian and governance priorities providing assistance and protection to affected and displaced communities, while also addressing the structural causes of instability in affected areas, maintaining a specific regional focus on cross-border fragility/dynamics. 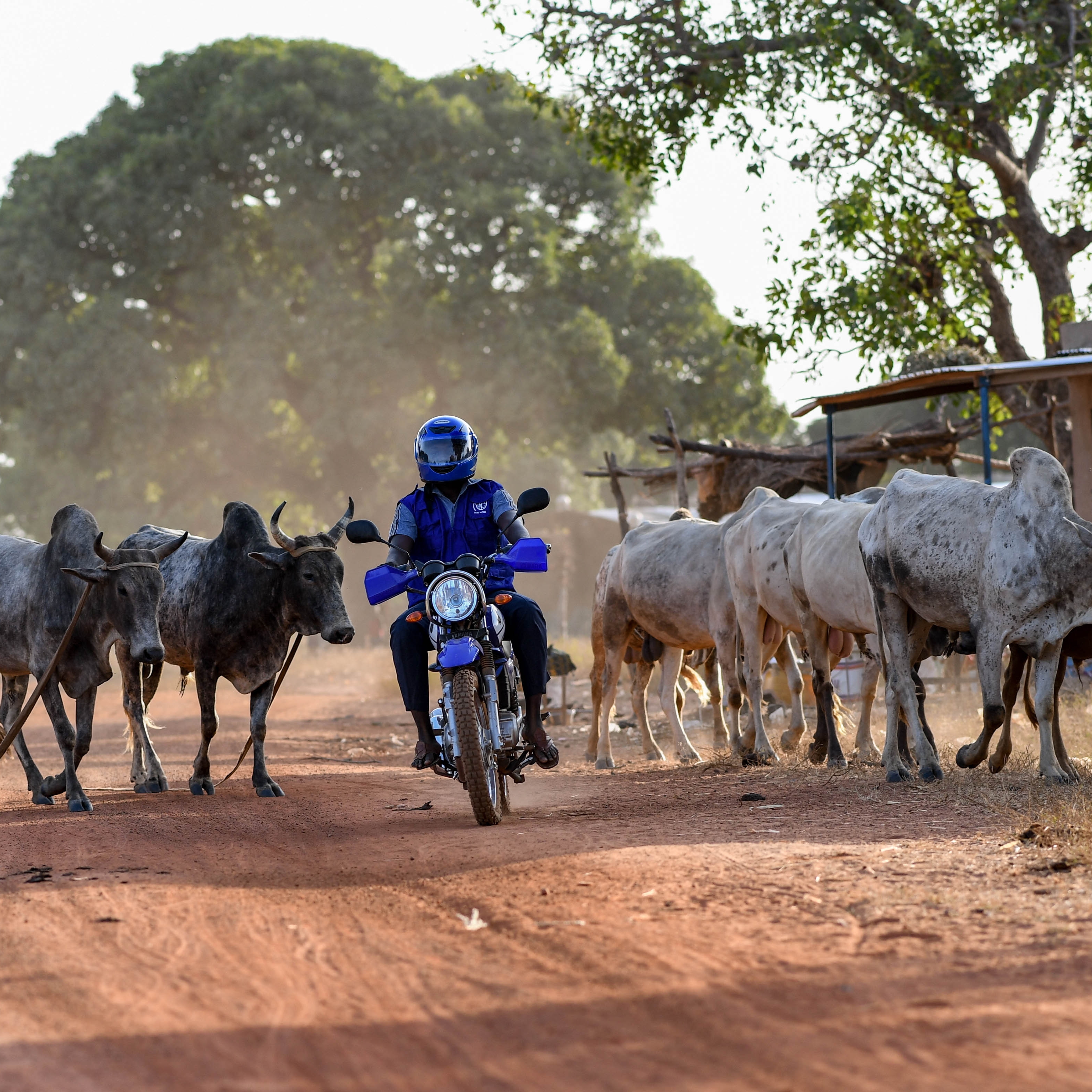 In the Central Sahel area, which covers Mali, Burkina Faso and Niger, longstanding lack of development and recent increasing violence over access to natural resources has created an environment exploited by non-State armed groups (NSAG) and exacerbated inter-communal conflict (including conflicts between herders and agricultors around transhumance campaigns). The Liptako-Gourma tri-border area between Burkina Faso, Niger and Mali, is severely impacted, with violent acts having expanded from Mali in 2012 to Niger and later Burkina Faso, also highlighting the high risk of conflict spill over to neighbouring States, including Mauritania, and the coastal States of Cote d'Ivoire, Ghana, Togo and Benin. The complex crises are exacerbated by climatic variability, demographic pressure, high levels of poverty and the absence of state institutions in most regions impacted, which further creates disaffection and a lack of access to basic services as well as to livelihood opportunities. NSAG activity has expanded geographically in recent years, increasing exponentially between 2016 and 2020, restricting access by State, humanitarian and development actors to the areas most in need of support. The crisis also generates significant protection concerns and needs with frequent human rights violations committed by all forces and armed groups, widespread violence, notably towards women and children, the presence of explosive devices, forced recruitments into NSAG and kidnappings, a lack of access to documentation or justice and massive forced displacements, as frequently highlighted by the Project 21 protection monitoring dashboards and reports produced by the Regional Protection working group. In late 2020, according to IOM’s Displacement Tracking Matrix (DTM), national authorities, UNHCR and OCHA, over 1.5 million people have been internally displaced by the ongoing crises, across all three States. In addition, all countries are going through sensitive political transition and/or elections at the end of 2020 or in early 2021.

IOM upholds operationalizing the humanitarian-development-peace nexus. In this respect, IOM has developed tools to enable flexible delivery of assistance covering immediate humanitarian needs, while addressing structural gaps leading to sustainable and local development, alongside a range of UN agencies, NGO and community-based local organizations, in support of all three Governments. IOM has been engaged in bolstering local coordination systems and supporting authorities at different levels through targeted programs. Being an active member of the United Nations and Humanitarian Country Teams in Mali, Burkina Faso and Niger, IOM leads the Shelter/NFI cluster in Niger, the Mental Health and Psychosocial Support (MHPSS) working group in Burkina Faso, co-leads the Shelter/NFI cluster and Population Movement Commission in Mali and engages extensively with other agencies in numerous clusters and working groups to ensure the coordinated delivery of assistance on multiple fronts. IOM has forged partnerships with local authorities and civil society organizations that enable the localization and rapid operationalization of interventions. Across the three countries, IOM has capitalized on its local presence and established relationships to promote peace preservation and peace restoration, through social cohesion and local governance initiatives, seeking to both reduce current conflict drivers and lay the groundwork for effective interventions leading to durable solutions. These efforts are further supported at the regional level through constant dialogues with counterparts such as the Liptako Gourma Authority, Economic Community of West African States (ECOWAS), Community of Sahel-Saharan States (CEN-SAD), G5 Sahel and Lake Chad Basin Commission.

For the past years, IOM has been mobilized to respond to the short-term as well as medium-term needs in all three countries, where IOM has a long-standing presence. Currently, IOM's operational presence in Central Sahel States boasts over 700 national and international staff members, working in nearly 20 locations, across all three countries. IOM's capacity includes humanitarian programming, notably shelter and non-food items, mental health and psychosocial support and movements tracking. The Organization also holds a transition and recovery expertise, which enables the conduct of significant community stabilization, peace building and durable solutions initiatives. IOM is also committed to mainstreaming protection and gender-based violence (GBV) throughout its humanitarian interventions.

With over 1.5 million people displaced in Central Sahel, emergency and transitional shelter and Non-Food Items (NFIs) assistance is a priority need in the three countries. The fact that the vast majority of IDPs are staying in host communities is putting strong pressure on already vulnerable communities, increasing tensions among groups. Other hosting environments include urban centers, formal and informal sites and collective centers.

IOM’s proposed response in Camp Coordination and Camp Management (CCCM) in Central Sahel will be aimed at displaced households settled in formal camps, spontaneous sites and collective centers as well as large groups of IDPs living in host communities and urban centers that could benefit from the services.

In support to and in collaboration with Ministries of Health and local authorities, IOM will conduct health activities that will aim to:

IOM in Mali and Niger will conduct some Water, sanitation and hygiene (WASH) activities for the benefit of affected and displaced communities, notably:

IOM’s protection activities will contribute to upholding the rights of displaced and affected populations in Burkina Faso, Niger and Mali and include:

GBV and protection will also be mainstreamed throughout all IOM emergency related activities.

Based on its global approach as described in its Community-Based Mental Health and Psychosocial Support (MHPSS) in Emergencies and Displacement manual, in the context of inter- and intracommunal violence and associated displacement in the Liptako Gourma region, IOM will offer direct mental health and psychosocial support services and activities in all three countries. It has been generally observed that there are emotional and relational changes within the population, and the following effects of stress in conflict zones are noticeable: fear, distrust and reduction of social interactions.

IOM will apply its substantial experience in community stabilisation to support the restoration of basic rights and essential services for vulnerable people, while promoting governance. This will be done in order to prevent further  displacement through reinforced access to economic opportunities and the rebuilding of trust among communities, thus addressing the root causes as much as the effects of the crisis as IOM creates the conditions for renewed dialogue between all stakeholders through a participatory approach. These activities will help promote resilience and integration among the populations through:

To promote peace in Central Sahel, IOM will support the transitioning of communities out of conflict, notably through community-based conflict management, providing support to community reconciliation processes intended to mitigate the drivers of conflict. Activities will notably target the most vulnerable youth while building their sense of purpose. Interventions will rely on the Organization’s capacity to:

IOM, together with humanitarian, development and private sector partners, will promote self-reliance approaches including a wide range of support tailored to individuals, households and communities, in particular to mitigate the detrimental impacts of prolonged displacement situations, accompany displaced people towards access to durable solutions, wherever possible and on a voluntary basis, and revitalize local economies towards interim or longer-term solutions, in alignment with IOM’s framework for the Progressive Resolution of Displacement Situations. This will be achieved through:

In line with the Sendai Framework for Disaster Risk Reduction (DRR) 2015–2030 and underpinned by broad multi-stakeholder engagement, IOM’s DRR efforts in Central Sahel will include:

Across the Central Sahel countries, IOM supports collective evidence-based decision-making through its implementation of the following data collection exercises: