IOM Niger seeks to provide lifesaving assistance to crisis-affected populations and to vulnerable Nigerien migrants within Niger or abroad, as well as to foreign migrants, the majority from West Africa, stranded in Niger, who have expressed their willingness to return to their countries of origin. This is complemented by the promotion of social cohesion and peaceful coexistence between host communities, internally displaced persons (IDPs) and migrants. Through community stabilization and peacebuilding interventions, IOM aims to reduce factors of instability that could lead to irregular and forced migration. IOM Niger also envisions scaling up its assistance in crisis-prone areas to strengthen resilience to shocks. 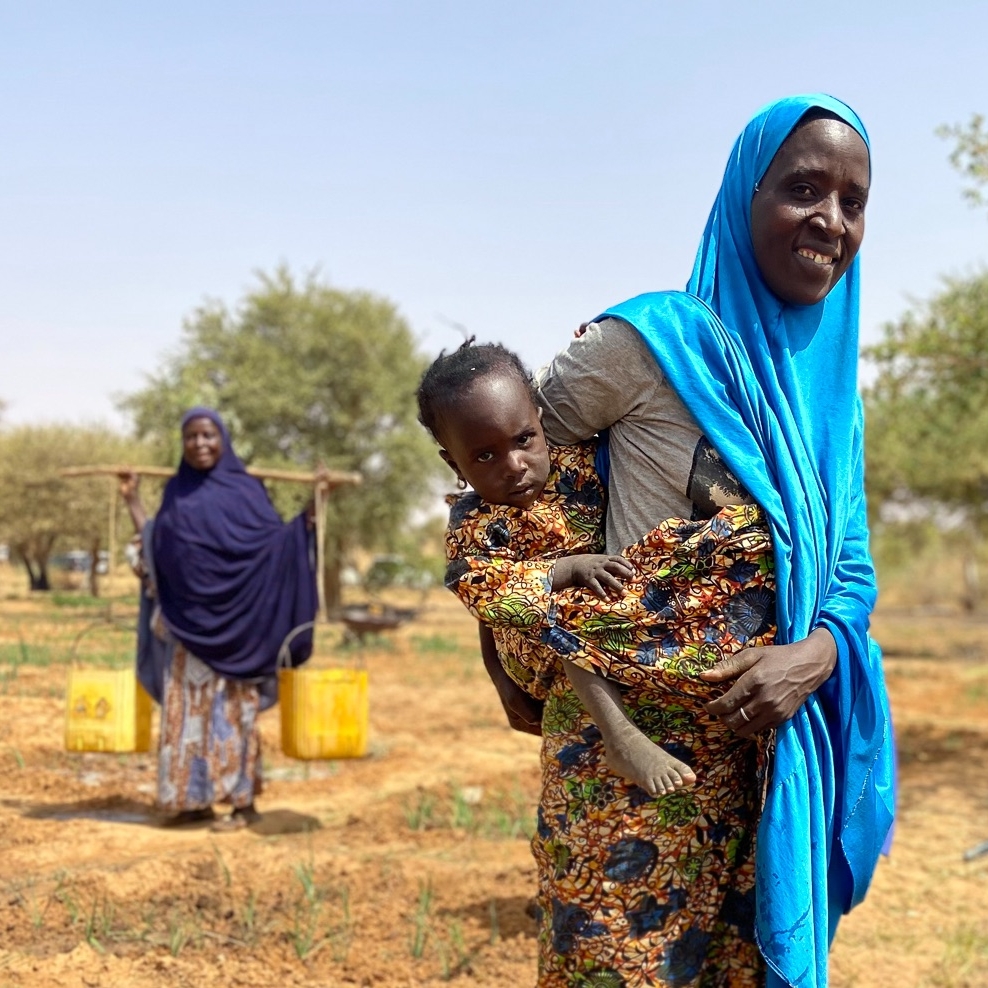 In January 2012, the Central Sahel crisis erupted with the conflict in northern Mali. The instability later extended beyond the Malian borders, affecting the Liptako-Gourma region, which includes northern Burkina Faso and western Niger – specifically the regions of Tillabéri and Tahoua. In the south-east of Niger, the Diffa region is affected by the Lake Chad Basin crisis, a multifaceted humanitarian crisis that has impacted Niger, Cameroon, Chad and Nigeria since insecurity started spreading from Nigeria in 2014. Meanwhile, the south-west of Niger has witnessed an increase in banditry and activity of non-state armed groups (NSAG) which spilled over into the Maradi (2016) and Tahoua (2019) regions from north-west Nigeria through the second half of the decade. The Niger-Chad-Libya triangle region is further affected by the presence of armed actors operating mostly through robbery in a no man’s land area along new migratory routes between Niger and Libya. At the same time, tension over the control of gold resources has been contributing to pervasive insecurity and violence since the second half of the 2010s.

This complex humanitarian, conflict and security situation has led to multiple displacement dynamics. In parallel, natural hazards are intensifying and diversifying (e.g., floods, droughts, wildfires), endangering lives and affecting livelihoods. Over 80 per cent of Niger’s population is employed in the agricultural sector, heavily relying on agriculture for food security and livelihoods. Concerns are rising over the effects of climate change including rising temperatures, reduced water availability and the occurrence of floods and other extreme weather events. Agricultural production in Niger is primarily subsistence-based and rainfed. Smallholder farmers are directly affected by the impacts of climate variability, which can reduce their food supply and increase the risk of hunger and poverty. As of October 2022, Niger hosted 376,809 IDPs and 279,446 refugees and asylum seekers, mostly concentrated in the regions of Diffa, Tillaberi, Tahoua, Maradi and Niamey, and primarily coming from Nigeria, Mali, and Burkina Faso (Plateforme de Coordination des Déplacements Forcés au Sahel). Niger presently ranked 176 out of 182 countries on the ND-GAIN Climate Vulnerability Country Index.

In addition, since September 2017, the Algerian government has systematically forcibly returned international migrants from Algeria to the border with Niger: according to IOM data, since 2019, 53,997 migrants (89% men, 5% women and 6% children) have been deported to Niger. Most of these migrants are from the Economic Community of West African States (ECOWAS) countries. The frequency of these expulsions has increased considerably, from a total of 9,290 Nigeriens in 2016 (average of 774 migrants per month) to 12,315 from January to October 2022 (average of 1,368 expulsed per month) and represents an increase of 77 per cent.

Migrants are arrested in several localities in northern Algeria and transported to Tamanrasset (Algeria) and from there, as reported by the migrants, they are taken to the border between Algeria and Niger and instructed to cross the border to the nearest border post in Niger (Assamaka), which is about 15 km on foot. These forced returns, and the precarious conditions in which they take place, expose migrants to increased risks of human rights violations, whether denial of civil and political rights (e.g. torture or arbitrary detention) or violations of economic, social and cultural rights (including migrants' right to health or adequate housing). In addition, in some cases, children have been separated from their families during mass arrests.

IOM Niger is the co-lead of the Shelter/Non-Food Items (NFI) Working Group alongside the Ministry of Humanitarian Action and Disaster Management (MHA). As co-lead, IOM provides technical guidance on shelter and NFI responses to the MHA and coordinates with other humanitarian actors to identify gaps and provide a principled standardized response in emergency shelters, transitional shelters and NFIs.

Moreover, IOM participates in the Inter-Cluster Coordination Group and is its focal point at the Humanitarian Country Team. IOM is also an active member of the rapid response mechanism providing assistance to crisis-affected populations and of the Protection, Health and Water, Sanitation and Hygiene Clusters. Additionally, IOM supports the ‘Cadre de Concertation sur les Migrations’, in charge of migration coordination at the central and regional level, and it is the lead agency for the United Nations Network on Migration, chaired by the Resident Coordinator.

IOM implements its Displacement Tracking Matrix (DTM) to track mobility trends and assess basic humanitarian needs and vulnerabilities of people on the move. IOM is also a member of the Information Management Working Group and participates in the UN Country Team.

Lastly, IOM collaborates with national authorities at the central and local level – including the Ministries of Interior, Public Health, Foreign Affairs, Women Promotion and Child Protection, and Justice; the High Authority for Peace Consolidation and the National Agency for the Fight Against Human Trafficking and the Smuggling of Migrants; the national crisis prevention and management system; and local actors including mayors and the ‘préfectures’.

IOM has been active in Niger since 2006 and significantly expanded its operations since. With its main office in Niamey and sub-offices across the country (Tillabéry, Tahoua, Arlit, Agadez, Dirkou, Zinder, Maradi and Diffa), the Organization is present in all the regions of Niger. Its long-lasting presence has allowed for the development of strong working relationships with the Government of Niger (GoN) as well as with traditional leaders (sultans, village chiefs) and community-based organizations.

IOM directly implements several programmes and activities and partners with government authorities, local and international organizations to deliver assistance to hard-to-reach areas. IOM has deepened its collaboration with the GoN throughout the COVID-19 crisis, working to support stranded migrants in Niger and negotiating humanitarian corridors to allow third-country nationals to safely return to their countries of origin.

As the humanitarian context derives from a structural lack of development and governance gaps, IOM collaborates with key partners to apply a humanitarian-development-nexus approach which is best suited to simultaneously respond to immediate needs and tackle drivers of vulnerability and instability.

Through its Migration Data and Research Unit and displacement-related data collection IOM has developed a deep understanding of migratory patterns and routes in Niger, as well as the motives for those embarking on their migration journey, and IDPs. These findings are used to adapt programming and support the humanitarian community in data management, for instance, IOM routinely shares findings with the GoN and partners for evidence-based policymaking.

Border areas in Niger are particularly fragile due to the high level of permeability of the borders coupled with the operational challenges of managing and patrolling such an extended area. As a result, cross-border criminal activities threaten the security and stability of local communities. Therefore, IOM aims to strengthen humanitarian border management in order to contribute to the stability in border areas. This fosters a holistic approach inclusive of humanitarian services to improve Health and Humanitarian Border Management (HHBM). IOM aims to:

In order to support the data needs of the humanitarian response in Niger, IOM will: