The Strategic Approach of IOM Ukraine for 2020-2023 focuses on three priorities for ensuring an efficient crisis response, recovery, and long-term development while contributing to efforts to leave no one behind and to reach those furthest behind first. These priorities include: i) sustainable recovery of conflict-affected communities through multi-sectoral integrated programming; ii) strengthening communities’ resilience through inclusive dialogue initiatives; and iii) further advancing Ukrainian society through long-term and people-centred sustainable development initiatives. The Crisis Response Plan reflects these priorities throughout the proposed activities, which aim to respond to the needs of conflict-affected communities as well as to the drivers and impacts of crises and displacement in recovery, taking into consideration the context of the COVID-19 pandemic.

UPDATE: The IOM Ukraine Crisis Response Plan is currently under revision. Please see the IOM Flash Appeal for Ukraine and Neighbouring Countries - Revised for the most up-to-date appeal. 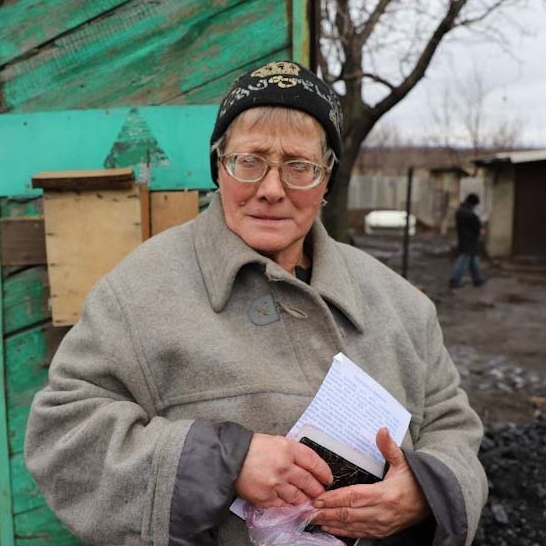 A woman with a disability residing close to the contact line in eastern Ukraine received coal from IOM Photo: IOM / Polina Perfilieva, 2021

According to the 2022 Humanitarian Needs Overview (HNO), 2.9 million people will continue to be in need in 2022 affected by the dual impact of the eight-year conflict and the COVID-19 pandemic. With over 1.4 million still living in displacement, according to the Ministry of Social Policy of Ukraine, there continues to be a high need for life-saving humanitarian assistance to both affected households as well as institutions that seek to support affected populations in accessing essential services and specialized care. Winterization continues to be a high priority need amongst households in the non-government-controlled area (NGCA). The Shelter/NFI Cluster estimates that at least 200,000 will require winterization across the Eastern Conflict Area (ECA) in 2022. With the ongoing conflict and additional risks posed by the COVID-19 pandemic, both medical and social facilities continue to request essential equipment to meet the health and social care needs of their populations. The Health Cluster reported that a third of households within 20km of the “contact line” struggle with access to healthcare services for individuals with disabilities, the elderly, women, and families with young children most affected. Many health and social care facilities were destroyed during the armed conflict and contact line communities have become isolated from major health centres in urban areas in NGCAs. Mental health and psychosocial support (MHPSS) has been cited repeatedly by Protection and Health Clusters as severely needed in the ECA to support communities in coping with the impact of the conflict and COVID-19. Recent National Monitoring System (NMS) reports have highlighted severe vulnerabilities amongst conflict-affected populations, with the latest reports stating that 50% of internally displaced persons (IDPs) indicated that their income afforded them just enough money to cover food costs and that they often had to reduce the amount spent on food. This food insecurity, which is indicative of broader livelihoods and general wellbeing insecurity, has a severe impact on people’s mental and physical health as they are unable to secure access to their basic needs and are at higher risk of resorting to negative coping strategies. The above needs are further exacerbated by natural disasters increasingly common in the Eastern Conflict Area, such as drought, water depletion, dust storms, and large-scale wildfires.

IOM has signed memoranda of understanding (MoU) with migration-related ministries and services in Ukraine and established local partnership arrangements with conflict-affected communities all around the country. These MoUs and partnerships reinforce IOM’s strong operational relationships with the Government of Ukraine (GoU), which is built upon close collaboration with relevant ministries at the national and regional levels, in particular the Ministry of Social Protection, the Ministry of Reintegration of Temporarily Occupied Territories, and the Ministry for Veterans’ Affairs of Ukraine. Such advanced and synergistic collaboration aims to ensure government and community ownership in a broad range of sectors – such as countering human trafficking, assisting IDPs and conflict-affected populations and communities, facilitating safe and regular labour migration, supporting reintegration of Ukrainians returning from abroad, assisting national minorities, and promoting cultural diversity and the integration of migrants.

IOM targets its assistance to meet the most urgent humanitarian needs of conflict-affected populations, including in the NGCAs of Donetsk and Luhansk regions and along the Line of Contact (LoC). IOM actively coordinates its interventions with other humanitarian actors who are operating in the same areas, in order to ensure adequate information sharing, to identify the potential for complementary activities, and avoid duplication of the support provided.

IOM is a member of the United Nations Country Team, the Humanitarian Country Team, and the United Nations Eastern Team. As such, IOM actively participates in the inter-cluster coordination group; the different clusters including Shelter/Non-food Items (NFI); Food Security and Livelihoods (FSL); Protection; Health; Water, Sanitation, and Hygiene (WASH); and the related technical working groups including for cash, MHPSS, and winterization. Beyond this, IOM participates in the strategic advisory groups of the Shelter/NFI and FSL Clusters. In addition, IOM, jointly with UNHCR, co-chairs the coordination platform for the UN Development Assistance Framework (UNDAF) 2018–2022 Pillar IV on human security, social cohesion, and recovery with a particular focus on eastern Ukraine, which focuses on joint UN efforts on strengthening social cohesion and building resilience of communities, IDPs and the most vulnerable populations affected by the conflict in the east.  Humanitarian actors made a commitment to step up efforts in implementing humanitarian-development-peace nexus (HDPN) programming over the coming three years (2021-2023) to facilitate the transition and handover of the response to local responders in government controlled areas (GCA). Discussions regarding HDPN programming are occurring within each cluster as well as within the HDPN Programming Task Force that IOM participates in.

Since April 2014, in coordination with the GoU, IOM has assisted over 600,000 IDPs, returnees, and members of the communities of return in 24 regions of Ukraine to address their most urgent needs and support socio-economic recovery. From the onset of the conflict, IOM has implemented various activities in eastern Ukraine through its emergency and stabilization programmes, established in response to the increase in humanitarian needs of conflict-affected populations in the Luhansk and Donetsk GCA and NGCA.

IOM’s humanitarian, development and peacebuilding programmes are implemented through four field offices in the Eastern Conflict Area – Kramatorsk and Severodonetsk in the government-controlled areas, and Donetsk and Luhansk in the non-government-controlled areas – one project office in Lviv, in the western part of the country, and one project office in Kherson, in the southern part. The overall management and supervision of project implementation is provided by IOM’s country office in Kyiv. Such a community-level footprint is what allows IOM to develop close partnerships with local actors, build strong relationships with local communities and gain a direct understanding of their needs. Combined with well-established security, staffing, and logistics arrangements, such field presence offers IOM a privileged vantage point from which to understand and analyse shifting social dynamics in order to enhance the provision of timely relief and early recovery assistance.

Conflict-affected communities; communities that are exposed to regular natural hazards; communities in regions neighbouring Crimea; IDPs and their new communities; IDPs who returned to the NGCA; former combatants, their family members and communities; survivors of human rights violations and abuses committed in the context of the ongoing armed conflict; labour migrants, returnees and their dependents during COVID-19 pandemic; communities of return; other population groups including IDPs with diminished livelihoods; teenagers and young adults (14-35 years), prioritising IDPs, minority groups, persons with disabilities, orphans, from rural areas, from low-income families, skilled but unexperienced; government and local authorities; civil society organization (CSOs); and international stakeholders.