IOM aims to support and protect the most vulnerable individuals across Lebanon, including migrants, refugees, and local community members, against mounting humanitarian needs and socioeconomic hardship caused by a multitude of compounding crises. To address the mobility dynamics of the multi-faceted crisis, IOM will provide lifesaving support, build economic and community resilience against the loss of job opportunities and growing tensions, and seek to prevent and discourage unsafe and irregular migration. 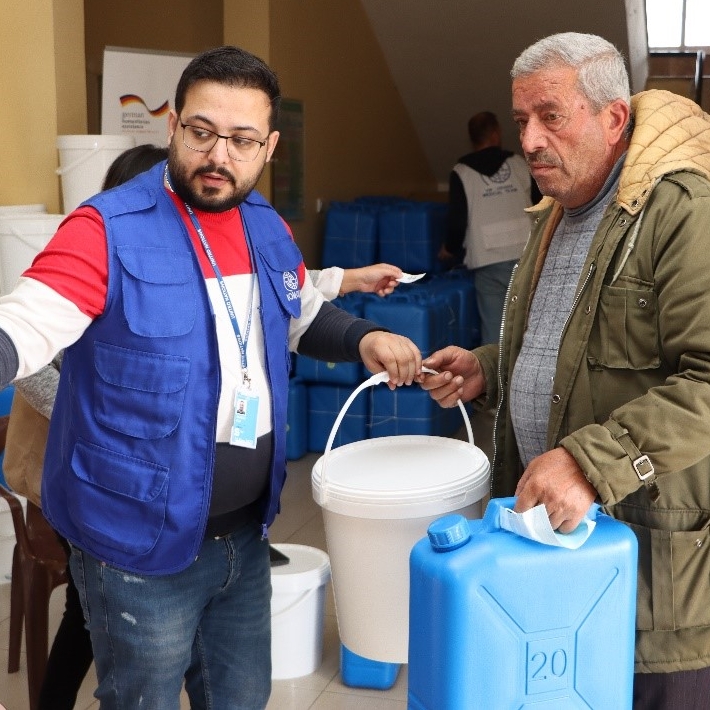 A beneficiary receiving a Hygiene Kit as part of the cholera response in Akkar. @ IOM Lebanon, 2022.

The humanitarian situation in Lebanon continues to worsen, triggering increased poverty and despair. The economic collapse ranks among the worst globally in modern times. It has caused severe inflation and unemployment, putting basic living costs out of reach for thousands of people and resulting in acute humanitarian needs. More than half of the Lebanese population is likely living below the poverty line (World Bank, 2022). Lebanon has one of the world's highest numbers of refugees per capita and currently hosts approximately 1.5 million Syrians. Refugees have been significantly affected by a sharp rise in poverty; they have limited access to food, education, health care and other basic services. In 2021, 90 per cent of Syrian refugee households were estimated to be living in extreme poverty. While equivalent data for 2022 is yet to be published, this figure is likely to remain high.

State bankruptcy has weakened public services, particularly the provision of electricity, and by extension, life-saving health care is threatened. Essential medicines to treat chronic diseases, as well as antibiotics, are increasingly difficult to obtain. A quarter of Lebanese, Palestinian and migrant households do not have access to adequate health services (REACH, 2022). The Russo-Ukraine war has disrupted grain supplies and threatened food security, with the cost of bread rising; 57 per cent of Lebanese households are struggling to afford food (WFP, 2022). Fuel shortages are disrupting water supplies, with critical water pumps idle for lack of fuel generation, resulting in an increased reliance on suspect water sources, particularly in vulnerable communities such as informal tented settlements. This has been a contributing factor in the cholera outbreak that hit Lebanon in October 2022. The outbreak demonstrates the impact faltering infrastructure can have, putting an already strained healthcare system, operating on limited capacity, under more pressure. This is aggravated by the combination of poor environmental governance and climate change, which is causing water scarcity, increasing rates of wildfires, and environmental degradation. These problems reflect a weak infrastructure, lack of preparedness and high exposure to catastrophic events, which is an increasing concern in the context of climate change. Despite its middle-income status, Lebanon is ranked 117 out of 182 countries globally on the 2022 ND-GAIN climate vulnerability index.

Furthermore, political uncertainty is high. Lebanon is without a functioning government and is stuck in a presidential vacuum. Political volatility has increased tension between groups, resulting in local clashes. Economic and state decay are destabilizing the country’s delicate political balance.

Deteriorating conditions are affecting mobility trends with an increase in irregular boat departures attempting to reach Europe. An estimated 4,211 Lebanese, Syrian and Palestine refugees attempted the journey between January and October 2022, already nearly triple last year’s figures.[1] This trend is particularly alarming given how dangerous these crossings can be. Two tragic sinkings have taken place so far in 2022 alone, with over 140 migrants drowned or missing. (Al Jazeera, 2022; L’Orient Today, 2022)

It is estimated that over 135,000 migrants reside in Lebanon, including 80 different nationalities (IOM, 2022). Migrants have been severely affected by the deteriorating economic conditions, with high rates of unemployment, food and shelter insecurity, and poor access to essential services like drinking water and health care, including mental health and psychosocial support (MHPSS) (OCHA, 2022). An increasing number are stranded and unable to return to their country of origin, meet their basic needs or support their families back home; the Multi-Sectoral Needs Assessment 2022 (MSNA) indicates that 60 per cent of migrants in Lebanon are in need of humanitarian assistance (OCHA, 2022). Due to the sponsorship (kafala) system, many find themselves having to choose between accepting exploitative working conditions, and wage theft from their employer, or falling into irregular status, limiting their access to assistance, and exponentially increasing the risk of falling victim to human trafficking, sexual exploitation, exploitative working conditions, detention, and deportation (Amnesty International). Protection concerns pre-existing the crisis, such as discrimination, sexual harassment and violence against migrants, especially female domestic workers, have further increased (IMS Policy and Working Paper Series, 2022). 60 per cent of migrants currently in Lebanon need humanitarian and protection assistance (an increase in 31% from last year), potentially as many as a quarter seeking assistance to return home. While the needs of migrants are at par, and in some areas more severe, than other population groups, only nine per cent of migrants received humanitarian assistance in the last 12 months and funding for specialized assistance to migrants is urgently required to ensure they are not left behind. (REACH & IOM, 2022)

IOM Lebanon programming forms a part of the wider United Nations response frameworks: the Lebanese Crisis Response Plan (LCRP), the Syrian refugee response in Lebanon, the Emergency Response Plan (ERP) and the UN Strategic Development Cooperation Framework (UNSDCF). IOM’s interventions are coordinated with and guided by LCRP and ERP sectors and respective pillar working groups of the UNSDCF. These include the basic assistance sector, livelihood, protection, health, social stability, child protection, GBV, WASH sectors and people planet, prosperity and peace pillars. Additionally, IOM leads the migrant sector under the ERP, which coordinates specialized assistance to migrants across more than 40 organizations. IOM engages with local and national government counterparts, including the General Security Directorate, the Lebanese Armed Forces, the Ministry of Public Health, the Ministry of Social Affairs, the Ministry of Justice, the Ministry of Labor, the Ministry of Interior; Municipalities and the Local government. Additionally, IOM works closely with a wide network of local actors, including non-governmental, civil society, and community groups, who constitute a key part of the overall social and protection landscape providing services to vulnerable communities. Through coordination, referral, and capacity development, IOM is dedicated to strengthening these actors to improve protection frameworks and service provision.

A beneficiary of the Individual Livelihood Assistance in Bekaa, using his newly purchased sewing machine through the grant provided by IOM to start up his small business. @ IOM Lebanon 2022.

Under this objective, IOM will target communities experiencing inter-communal tension and/or prone to irregular migration, with a focus on North Lebanon, Akkar, and the Beqaa Valley. IOM will deliver locally-centred interventions to promote community resilience and social cohesion, with a focus on livelihoods, local governance, and the improvement of local services and public infrastructure. In doing so IOM will work with a range of entities including municipalities, local businesses, schools, clubs, government ministries, Social Development Centres, and primary healthcare centres.

Under this objective, IOM will support state actors, including the General Security Directorate, Lebanese Armed Forces, municipalities and Civil Defense Units, and the Ministry of Public Health to strengthen their emergency response capacity in relation to disease surveillance, search and rescue, and disasters. This will be done via multi-hazard risk analyses, and the provision of technical assistance, equipment and training. IOM will work with a range of entities including border authorities, national search and rescue services, municipalities, Civil Defense, the Lebanese Armed Forces, the General Security Directorate, the Ministry of Public Health and primary healthcare centres.

Under this objective, IOM will conduct data collection activities, with a focus on migrants and irregular migration trends, to inform humanitarian programming in Lebanon.