IOM Madagascar works to ensure that migration to, from and within Madagascar is a choice, not a necessity. The Organization works closely with state actors, other UN agencies and non-profit organizations to provide direct assistance to migrants and internally displaced persons, to address the adverse drivers of migration and to reduce tensions in destination communities. 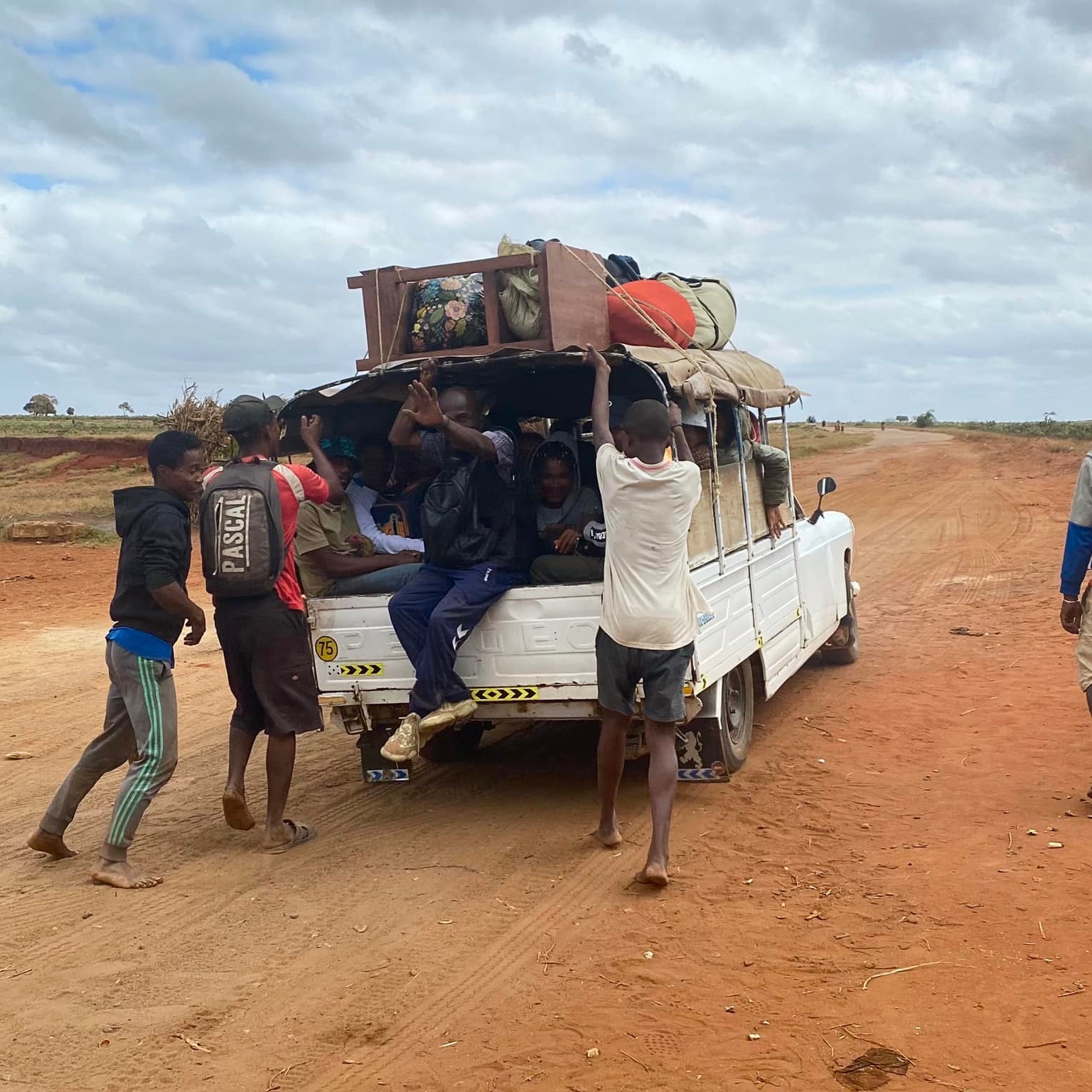 The population in the South travels by taxi-brousses, the common means of transport throughout the country. © IOM Madagascar 2022 / Ekaterina Samolygo

Madagascar is ranked 173rd of the 191 in the 2022 Human Development Index. Between 2013 and 2019, the socio-economic impacts linked to Covid-19 erased the progress made in the fight against poverty. Since 2020, 1.8 million people have fallen into extreme poverty and in 2022, the poverty rate will reach 81 per cent, its highest level since 2012.

Madagascar is highly exposed to natural hazards such as cyclones, floods, and drought because of its location in the southwestern Indian Ocean basin. The country is ranked 167 out of 182 countries on the 2022 ND-GAIN climate vulnerability index. Dependence on rain-fed agriculture, poor water availability, and inadequate infrastructure, exacerbated by poverty, have reduced resilience to natural hazards. Roughly 80 per cent of the population is employed in agriculture, raising concerns over the effects of climate change including rising temperatures, reduced water availability through changing precipitation patterns and more extreme weather events, such as droughts, cyclones and floods. Madagascar was affected by an exceptional number of tropical cyclones in 2021 and 2022 with Ana, Batsirai, Emnati, Dumako, Gombe and Jasmine, which has led to significant infrastructure damage and an increase in the number of internally displaced persons. Although the 2023 cyclone season is expected to be close to or below the climate average, in the current context of global warming, it only takes one cyclone to have a catastrophic impact.

While internal seasonal migration has been common, recurring droughts, especially in southern Madagascar, continue to drive more permanent migration from affected areas to other parts of the country, particularly cities. As a result, Madagascar’s urban population is growing rapidly. IOM estimates that over 100,000 people yearly migrate from rural to urban areas, especially to the capital of Antananarivo, where over half of the country’s urban population lives. This results in 60-70 per cent of the informal constructions in the city being in slum-like conditions, contributing to unplanned urbanisation.

While Madagascar is a relatively safe state, violence is present in sometimes very brutal forms, as manifested by the rise of the Dahalo (rural banditry) phenomenon, criminality, and kidnapping, attributed to high levels of poverty and lack of employment opportunities, further accentuating the feeling of fear and insecurity in both urban and rural areas, and triggering small scale internal displacement. Large layers of the population perceive other forms of symbolic or latent daily violence that put their lives at stake because of their exposure to extreme poverty, the precariousness of uneducated and unemployed youth, etc.; therefore, this weakens the social balance of Malagasy society.

Madagascar is both a source and destination country for human trafficking, a situation exacerbated by economic challenges. Trafficking in Madagascar can take the form of sexual exploitation, domestic servitude, as well exploitation in the textile and fishing industries.

IOM is a member of the UN Country Team (UNCT) and Humanitarian Country Team (HCT), including the Shelter and CCCM clusters of the latter. IOM maintains close partnerships with United Nations (UN) agencies, non-governmental organizations (NGOs) and civil society organizations (CSOs) on a range of crisis and migration-relevant issues.

Madagascar has been an IOM Member State since 2001. Recent and ongoing projects include collecting data on displaced persons (DTM) in the Grand Sud region, helping to rebuild shelters and housing in the east of the country affected by the cyclones in February 2022, and capacity building of the relevant stakeholders (local government, NGOs, CSOs, etc) on the use of the DTM tools in natural disaster settings, amongst others.

Following the signing of a cooperation agreement between the Government of Madagascar (GoM) and IOM in October 2014, IOM opened a permanent office in Antananarivo. This agreement has allowed for a significant expansion of IOM's activities in the country, in particular, the development and implementation of programmes in the areas of migration and health, international migration law, migration and environment, community stabilization and peacebuilding, counter-trafficking, forced migration and internal displacement, labour migration, diaspora mobilization and integration of migration into urban and rural development, channelled through the provision of capacity building, advisory support, operational support and technical expertise. IOM Madagascar is currently present in Antananarivo (Country Office) and Ambovombe (Sub-office).

IOM led and has been actively engaged in the recently completed Capacity for Disaster Reduction Initiative (CADRI) with UNDRR and UN partner agencies. The CADRI Partnership will support the government and the UN Country Team to mobilise multidisciplinary expertise to facilitate a DRR capacity assessment in the sectors prioritised by the government. It will cover capacities to manage all types of hazards (hydrometeorological, biological, geological, technological/industrial, and fire) in rural and urban areas.

IOM will work together with the Malagasy government in the areas of protection, movement assistance, cash and voucher assistance (CBI), shelter and CCCM, targeting the following groups and entities:

To support the mental health and psychosocial needs of people in need IOM will:

IOM will enhance the capacities of Camp Coordination and Camp Management of the relevant actors, including the national and regional government bodies through:

IOM will ensure that protection principles are mainstreamed across interventions to ensure safety and dignity, avoid causing harm and guarantee meaningful access to assistance for all persons in need, without discrimination. This includes GBV risk mitigation as well as Disability Inclusion throughout the program cycle. Particular attention will be given to effective participation and empowerment of the community, ensuring that Complaint and Feedback Mechanisms (CFM) and other reporting mechanisms related to Prevention against Sexual Exploitation and Abuse (PSEA) and the Child Safeguarding Policy are in place to prevent misconduct and guarantee accountability to affected populations, in line with the IOM Accountability to Affected Populations Framework. As such, IOM will:

IOM will support the Malagasy government by implementing activities in the areas of resilience including peacebuilding and peace preservation, and community stabilization, cash and voucher assistance (CBI) targeting:

To improve stability within communities most vulnerable to, or impacted by, drought-induced internal migration, IOM will undertake community stabilization initiatives that promote and enable local adaptation and resilience, including:

IOM Madagascar will implement peacebuilding activities to prevent and resolve tensions and insecurity both by addressing drivers of displacement and supporting sustainable peace between migrants and destination communities. Key interventions in this area will include efforts to:

IOM will work in the areas of preparedness and risk reduction, points of entry, and emergency preparedness, targeting:

Given IOM leadership and active engagement on the recently completed CADRI and risk-informed planning work with UNDRR and UN partner agencies, IOM will work to reduce disaster-induced displacement arising from natural hazards such as cyclones, floods and wildfires through improved disaster risk management, preparedness and response inclusive of the implementation of early warning systems. IOM will also assist communities to strengthen resilience as part of the recovery and reconstruction process, in line with the Sendai Framework for Disaster Risk Reduction. Activities will include to:

IOM will work with national and local authorities and communities to enhance their capacity in anticipating, responding to, and recovering from an emergency. IOM will: