IOM, in coordination with humanitarian and development partners, seeks to support the people of Myanmar through the provision of essential and life-saving multi-sectoral assistance to crisis-affected populations, while building local capacities for response and recovery. Recognizing the complex mobility dynamics and cross-border implications of the crisis, IOM aims to provide data and analysis on mobility and needs to the wider humanitarian community and will continue to coordinate to ensure that preparedness actions and targeted response capacities are in place and strengthened. 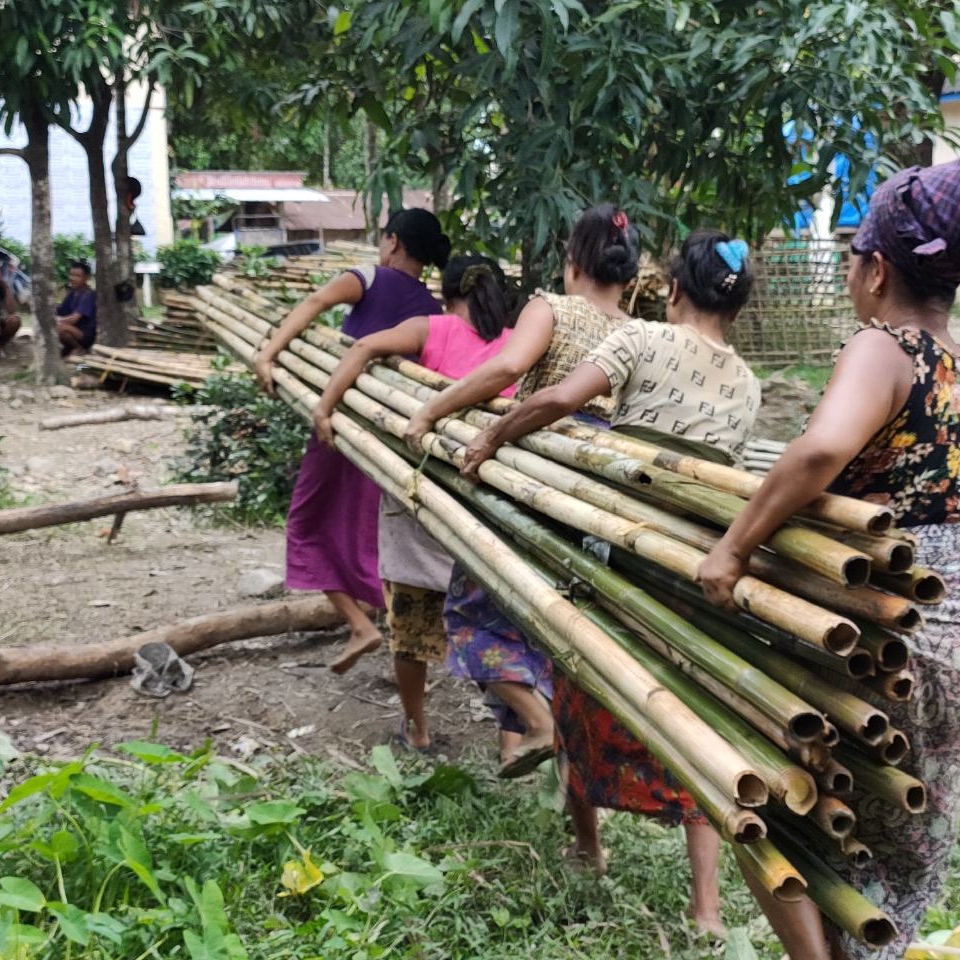 Almost two years since the military takeover in February 2021, the economic, political, and social crisis in Myanmar has become more complex, with no signs of resolution. Myanmar faces acute humanitarian needs, public infrastructure and services have deteriorated with the departure of personnel who have joined the civil disobedience movement (CDM), and as the country faces the consequence of global crises - including but not limited to rising inflation and prices for basic commodities.

Conflict-related displacement continues unabated, with 1.1 million people having been forced to flee their homes since February 2021, out of 1.4 million total displaced in the country. The highest rates of displacement are in the North-West, where 770,400 people remain displaced since February 2021, of which 612,400 are in Sagaing region alone (OCHA, 2022). Active conflict and clashes also continue in the South-East where just under 300,000 people remain displaced. In these locations, families experience repeated, short-term displacement, moving to avoid armed actors, often in hard-to-reach forest areas. There are frequent reports of arson attacks against villages, leading to widespread destruction of homes, public buildings and personal as well as livelihood assets.

Protection risks are grave, with increasing incidents of injuries due to explosive remnants of war, regular reports of arbitrary arrests and detention, as well as greater risks of domestic, gender-based violence and exploitation and abuse against the backdrop of increasing lawlessness and limited means for accessing formal justice systems. In Rakhine, clashes have recently intensified, resulting in 20,000 newly displaced as of September 2022. Security measures have also been imposed, limiting the movement of people and goods. Humanitarian access is a challenge due to several factors - including operational impediments imposed by authorities, hard-to-reach rural, mountainous, or jungle areas people are displaced to, as well as conflict-related insecurity leading to roadblocks, checkpoints and travel restrictions.

The economic downturn due to COVID-19 and the political turmoil has resulted in increasingly complex and mixed population movements, both internally and internationally, including regular and irregular cross-border movements between Myanmar and neighbouring countries in both directions. Amongst these overall flows, the proportion of migrants migrating from or returning to conflict-affected contexts (including to/from a situation of existing displacement) has increased. Disrupted livelihoods, deteriorating economic and security conditions, and increasing mobility have also increased protection risks and vulnerabilities, as people resort to unsafe and high-risk migration strategies, posing greater risk of trafficking, exploitation or abusive recruitment practices, including from displacement sites such as camps. As of October 2022, IOM estimates that approximately 40,000 Myanmar nationals are leaving the country monthly for conflict-related but also economic and other reasons, through a range of regular and irregular pathways, with the majority migrating to Thailand.

In 2023 displacement is expected at a similar or higher rate as a result of the ongoing or worsening conflict. Humanitarian space is also expected to worsen, with increased scrutiny on humanitarian organizations. Public health and education services will likely continue to be disrupted, including services related to COVID-19, with protection risks increasing. The Financial Action Taskforce’s “call for action” blacklisting of Myanmar in October 2022 will likely further disrupt banking services and impact the financial flows into the country. Planned elections in 2023 could result in additional widespread insecurity and subsequent clampdown by the Myanmar Armed Forces, while de facto authorities are expected to push for camp closures and forced returns.

With high vulnerability and low readiness, Myanmar is ranked as one of the world's most at-risk countries for climate change. The country ranks 156 out of 182 countries on the Notre Dame Global Adaptation Initiative Index on climate vulnerability. Myanmar continues to be at risk for disasters due to natural hazards, such as tropical storms, cyclones, and earthquakes. The country is also vulnerable to sea level rise and as the majority of the population relies on agricultural livelihoods which are climate-sensitive, additional action is urgently required on adaptation.

IOM is an active member of the Humanitarian Country Team and related humanitarian coordination mechanisms at the national level, as well as at state and regional levels in the North-East, Rakhine, South-East and North-West. IOM engages with the Inter-Cluster Coordination Group to coordinate inter-sectoral humanitarian response and recovery activities, and participates in numerous humanitarian clusters and working groups at national and sub-national levels. This includes food security, shelter/non-food items/camp coordination and camp management, health, and protection clusters, as well as relevant working groups, including the child protection working group. Further, IOM coordinates cash assistance closely with the Cash Working Group, to ensure that approaches are harmonized whenever feasible and possible.

IOM also coordinates activities through the UN Country Team (UNCT) and is an active contributor to the Myanmar Health Response Contingency Framework and the Socioeconomic Resilience Response Plan (SERRP), advocating for the mainstreaming of migration and mobility considerations across response activities. In addition, IOM co-chairs the Human Trafficking Working Group with the United Nations Children’s Funds (UNICEF), facilitating information-sharing and coordination of responses to human trafficking across the country. IOM works closely across borders and at regional and sub-regional levels to ensure a coordinated response to the needs of Myanmar migrants and to better understand mobility dynamics, including those of returning populations.

Internally, IOM coordinates closely with the IOM Thailand office regarding issues affecting migrants and refugees from Myanmar and cross-border issues, as well as with the Regional Office in Bangkok and Headquarters in Geneva.

While considering safety, security and duty of care to field teams and partners, IOM is particularly well-positioned to support areas of emerging need in the North-West and South-East, given the challenges (under the present circumstances) for new actors to establish partnerships, presence and operations in these locations. IOM has been operational and providing either direct assistance or assistance through partners in Saigaign, Magway and Chin, since 2017. In addition, IOM has been working in the South-East since 2005, including in hard-to-reach areas with ethnic minority populations near the Myanmar-Thai border. IOM also has vast experience in providing support to internally displaced persons and affected communities in Rakhine state and has a substantial presence in Yangon to respond to the needs of urban displaced populations and vulnerable migrants.

IOM supports accountability to affected populations (AAP) during project design and planning, implementation, monitoring and evaluation and further adopts conflict-sensitive approaches throughout the programme cycle, ensuring that interventions do not unintentionally contribute to conflict and instead strengthen opportunities for peace and inclusion. IOM also adopts strong protection mainstreaming across all sectors of intervention, to ensure that partners and teams on the ground have the basic capacity to identify, report and refer protection incidents and assist beneficiaries in need of protection services, in coordination with local networks, partners, communities and religious groups. All IOM interventions mainstream capacity building and technical support to local CSOs/CBOs and community-led initiatives, to increase sustainability and ensure a high degree of local ownership and influence in the design, planning and implementation of programming.

Distribution of cash at an IDP site near the Myanmar-India border, Chin State. © IOM Myanmar 2022

IOM will target a range of non-governmental actors, including CSOs, community-based actors, local volunteer groups, ethnic health organizations and other local organizations in border communities and migrant-dense areas, vulnerable mobility corridors and displacement sites. Migrants and mobile populations will be directly and indirectly supported through preparedness measures developed and strengthened under this objective. In addition to people and entities targeted directly, IOM expects to reach an additional 56,000 individuals and 30 entities indirectly.

IOM’s activities under this objective will target humanitarian, development and peace partner organizations, as well as other relevant actors, who will be provided with information on human mobility, living conditions, and related multi-sectoral needs, enabling them to have a better understanding of the displacement and mobility situation in the country and contributing to improved, evidence based response planning and implementation. Data will be shared taking into account risks associated with data collection and dissemination in the country

IOM will provide access to humanitarian services to crisis-affected individuals, including IDPs, host community members and returnees, through the disbursement of funding and capacity strengthening of local NGOs and CBOs, targeting 150,000 individuals directly and 100,000 indirectly.