IOM, in partnership with key stakeholders, including governmental, non-governmental organizations and UN agencies, continues to provide humanitarian assistance to internally displaced persons (IDPs) and affected communities while working to address the drivers of the conflict, in alignment with the strong commitment to operationalize the triple Nexus made during the ministerial roundtable convened in October 2020 to gather political and financial support for Central Sahel. 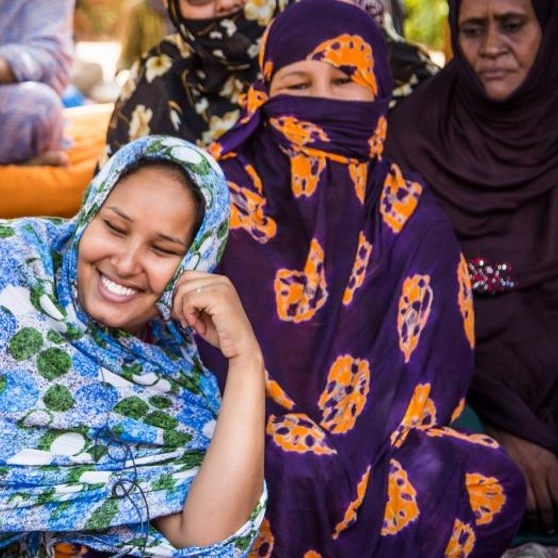 Focus group discussion with women in the region of Timbuktu

For the past decade, Mali has faced an extremely complex humanitarian crisis generated by the presence of non-state armed groups in the Northern and Central regions and subsequent violence, conflict with armed forces and human rights violations, fueled by inter-community tensions and rooted in a longstanding challenges related to development. The crisis has considerably worsened the living conditions of a large part of the population in the affected areas and led to massive population displacement. According to IOM's October 2020 Displacement Tracking Matrix (DTM) report, 311,193 people continue to be displaced mainly due to intercommunal violence in the regions of Mopti, Gao and Menaka. The insecure environment also led to spontaneous movements of vulnerable groups who have notably lost their livelihoods. The vast majority of IDPs live in crowded host families and communities or informal temporary sites, lacking access to the most basic services.

Compounding this already precarious situation, the COVID-19 pandemic is also contributing to paralyzing the country's economic system, risking impoverishing populations already rendered extremely vulnerable by the conflict, whilst also further burdening the struggling healthcare system. Moreover, on the socio-political level, the country has been experiencing a deep crisis culminating with the military coup of 18 August 2020. This has had a significant impact on humanitarian operations including the temporary suspension of activities involving government institutions. Since the coup and the establishment of a transition government for 18 months, IOM Mali and the international community have been working with the transition authorities to respond to the needs of the most vulnerable.

IOM works in close partnership with UN agencies in Mali, being an active member of the UN Country Team (UNCT) and Humanitarian Country Team (HCT), as well as with other international organizations and NGOs. IOM is the co-lead of the Commission of Population Movement (Commission des Mouvements de Population – CMP in French) with the National Directorate of Social Development (Direction Nationale du Développement Social - DNDS in French), which is composed of UN agencies (OCHA, UNICEF, WFP, UNHCR and IOM), NGOs and Government entities (Ministry of Social Affairs and the Ministry of Security and Civilian Protection). IOM also co-leads the Shelter and Non-food Items (NFI) Cluster in Mali with UNHCR. In addition, IOM is a member of the Information Management Working Group, HCT Task Force for the COVID-19 response, Housing, Land, Property (HLP) and Natural Resources Working Group, Protection Cluster, Gender-based Violence (GBV) and Child protection Sub-clusters and the Regional Committee for the management of IDP sites. Through these fora, IOM ensures that crisis-related activities are duly coordinated with relevant stakeholders.

Alongside other agencies and through these coordination mechanisms, IOM works closely with government counterparts, in particular the Ministry of Solidarity, Ministry of Health and Social Affairs as well as the Ministry of Security and Civilian Protection. In 2014, as part of long-term efforts towards capacity reinforcement of the Government of Mali, IOM transferred its Displacement Tracking Matrix (DTM) to the DNDS, while continuing to provide technical and financial support to ensure information is made available to humanitarian actors and other relevant stakeholders.

Established in Mali since 1998, IOM has been providing the Malian government with technical support in a variety of areas for 23 years. Since 2012, IOM has significantly expanded its operational presence and activities, spanning humanitarian response, transition, development, and community-based peace-building oriented interventions. Wherever possible, IOM integrates capacity strengthening components of key stakeholders including beneficiaries in its programmes to promote local ownership and contribute to the development of policy frameworks, in the interest of IDPs and affected communities in places of displacement, en-route, and in places of return. As co-lead of the CMP within the Protection Cluster, and having established the DTM in Mali in 2012, IOM has extensive experience in the country in the collection, analysis and provision of reliable information on population movements and needs, critical to informing IOM programming, as well as that of the government and other actors.

IOM’s main office is based in the capital city of Bamako. With more than 150 staff, including 15 working in the emergency and recovery unit. IOM has strategically-located field offices across the country in Bamako, Kayes, Mopti, Timbuktu and Gao. IOM’s Mali capacity notably covers shelter, protection, Mental Health and Psychosocial Support (MHPSS), DTM (including information management), peace-building and social cohesion.

IOM will respond to the humanitarian needs of displaced and conflict-affected populations in the central and northern parts of the country. Particular attention will be paid to vulnerable groups and persons with specific needs such as the youth, pregnant and lactating women, persons with disabilities, and the elderly.

IOM continues to provide tailored shelter/NFI assistance to the most vulnerable IDPs to address their urgent needs and alleviate their suffering. According to several recent field assessments and surveys, shelter and NFI are among the three priority needs cited by displaced persons. IOM works with implementing partners which will be trained on inclusive distribution techniques as well as on cross-cutting protection, including GBV risk mitigation and Prevention of Sexual Exploitation and Abuse (PSEA). IOM's initiatives will include:

To support the site management response currently under the Site Management Committee of which IOM is a member (CCCM), IOM plans to:

IOM will continue to provide safe access to high quality, timely and adequate WASH services in the targeted areas in the country. Initiatives will include:

IOM will continue to work with the Ministries of Health and health sector partners in Mali to enhance healthcare provision for IDP and host communities. This will include:

Following IOM’s Manual on Community-Based Mental and Psychosocial Health Support in Emergencies and Displacement, the Organization will target displaced and host communities affected by the crisis. Initiatives will include:

In order to ensure that protection risks to which affected populations are exposed are reduced, IOM will conduct protection intervention and integrate protection mainstreaming principles across its crisis programming including through:

Distribution of livelihood kits in Timbuktu

IOM in Mali seeks to address the root causes and impacts of displacement in order to prevent further crisis and allow for recovery, with particular attention to displacement affected populations in the center and northern parts of Mali. To strengthen social cohesion, IOM's approach targets local communities, including authorities, women and youth, as well as IDPs and host communities, as relevant to stability needs in the target localities, using a gender and conflict sensitive lens. At the level of each intervention site, the types of conflicts encountered will be identified in order to establish the lines of conflict (functional links), understand their evolution and frequency, know the most sensitive areas but also the prevention and management mechanisms and evaluate their degree of effectiveness. The results of this preliminary analysis of the state of conflict in the intervention zone will be used for the implementation of activities.

IOM seeks to contribute to building the resilience of conflict-affected populations in order to enhance stability, thus preventing further displacements and laying the foundation for durable solutions. Initiatives will include:

IOM's approach emphasizes community ownership and trust in conflict resolution and prevention and the promotion of peace. A solid foundation built on trust encourages parties in conflict to diffuse tensions and find peaceful solutions to problems that, if left unchecked, could threaten and destabilise the entire community. As such, IOM will:

IOM supports community recovery and resilience-building efforts to address the factors that led to displacement as a prelude to the voluntary return of displaced populations to their places of origin and local integration in the places of displacement. In accordance with IOM's Progressive Resolution of Displacement Situations, initiatives will include:

Besides being particularly vulnerable to slow-onset environmental events such as rising temperatures, land degradation and water scarcity, Mali is also affected by nationwide structural vulnerability to floods. According to IDMC, floods led to the displacement of 36,957 people in 2019. As such, it will be important to respond to assist affected populations and reinforce the capacities of governmental partners to prevent disaster and reduce risks linked to natural hazards.

IOM will seek to improve evidence-based interventions and policies in Mali by providing governmental, non-governmental and humanitarian actors in Mali, with data and analysis linked to the displacement of populations.

Conflicts related to access to natural resources occur both between agricultural and pastoral populations themselves, depending on the herds being transported or older community quarrels. In order to reduce tensions linked to resource management and conflict surrounding transhumance campaigns, IOM will improve cross-border cooperation between communities and local authorities in the prevention and management of conflicts related to access to natural resources, as well as strengthen local ownership of pastoral and agricultural resilience solutions along the Malian border between pastoral, agro-pastoral and agricultural populations. In addition, IOM plans further interventions to collect data on transhumance and agro-pastoral conflicts through IOM’s Transhumance Tracking Tool (TTT). With continued monitoring of displacement and needs analysis of vulnerable populations required to inform the humanitarian response, IOM aims to: